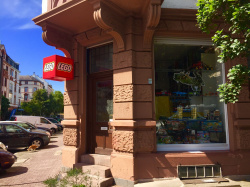 LEGO is cult! With the small colorful bricks and their patented plug-in system, a formerly small company from Denmark has revolutionized the toy industry worldwide. What actually seems impossible today is the fact that after the first great success, the deep fall came unexpectedly and the company was on the verge of bankruptcy. It was only a drastic change in the product range that saved the company and made it the market leader again. To date, LEGO has sold over 400 billion (!) bricks worldwide. But LEGO still has a unique fan community beyond the children's rooms, which has finally helped the little bricks to absolute cult status. In the meantime, there are Lego fairs, Lego films, Lego art, Lego swap meets, etc.

LEGO is loved by children as much as by adults. Thomas Panke, the "Hero of the Bricks," is one of those adults. In 2013, he turned his passion into a profession and opened his own store. In Sachsenhausen, he sells not only current sets, but also those that are actually no longer produced. Even if these sets are sometimes already played with, Panke guarantees that they are always in first-class condition. Anything else would not be on the shelf here. But there are also some such sets still in their original packaging - and that is of course a very special highlight especially for collectors!

Even Lego fans who are missing a part in their sets can usually find the right replacement part in this great store. In a relaxed atmosphere, you can browse extensively here, but you can also rely on really expert advice. This is proven by a look at the YouTube channel of "Held der Steine", which not only gives an impression of what is offered to you in the store, but also how much passion for the matter is present here from the owner. A great selection as well as nice and competent advice - even as an adult you will quickly become a child again. Clearly, this very special LEGO store is a real Frankfurt tip!

Opening hours: Thursday to Saturday at the beginning of each month

Address: Laubestraße 26 (directly opposite the old shop at Gutzkowstr. 16), 60594 Frankfurt am Main