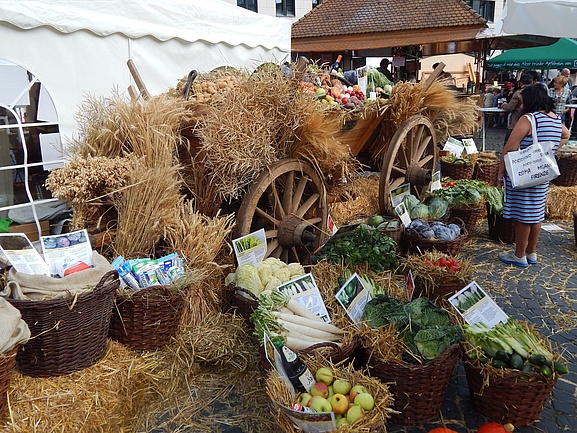 Harvest festivals exist in many cultures. The harvest festival was celebrated in pre-Christian times when people offered thanks to the gods at the completion of the bringing in of the harvest.

The harvest festival and celebration have two related sources:

1. Man's dependence on the natural cycle
and
2. Religious significance - giving thanks to God for the
harvest.

Even the ancient Israelites celebrated the Feast of Tabernacles.

Like many ancient customs, harvest rituals were adapted by the church.

In Britain, the harvest festival was introduced in the middle of the last century. Since that time, people have decorated churches with grains, fruits, vegetables, and produce of all kinds.

After the Thanksgiving service, the produce is distributed to charities

In the United States and Canada, Thanksgiving Day (German: Day of Thanksgiving) is celebrated.

In 1623, a day of fasting and prayer was observed during a drought in New England, which developed into the custom of giving thanks annually after the harvest.

In 1863, President Abraham Lincoln established Thanksgiving Day as a legal holiday, which has been celebrated on the fourth Thursday in November ever since.

In some parts of Germany, the "Erntedankzug" still exists.

Crops, fruits and vegetables lie on the wagons pulled by horses or tractors. Children and adults don old traditional costumes and demonstrate some of the old harvest customs.

In France, a harvest festival is also celebrated at the end of the grape harvest in autumn.

Nowadays, the church harvest celebration is integrated into the church service.

Harvest gifts decorate the altar or are brought to the altar during the service.

In many congregations, this service is also combined with a solidarity action in aid of hungry people.

In the Main metropolis, harvest festivals are held annually in mid to late September in the Palmengarten and on the Zeil shopping mile.

The Almabtrieb in the mountains includes them, as do various saint festivals in late autumn.

The feast of St Michael (Sept 29) is one of them, as is that of St Martin (Nov 11), when St Martin's minn (the new wine) is drunk and St Martin's goose eaten.

On Martins Day, children parade through the streets in colourful processions armed with lanterns.

In folk custom, the thought of death and transience plays an important role in the celebrations and commemorations that take place in autumn (see All Saints' Day, All Souls' Day, Sunday of the Dead)

October is not only the time of many harvest festivals.

In many places one celebrates the festival of the Kirchweih, also called Kirmes (church fair), Kirta (church fair day), Kirchweihe or Kirchweihfest, Kerbe or Kilbe.

The Kirchweihfest commemorates the custom, documented since the 9th century, of celebrating the day of the solemn consecration of a church, the Kirchweihe, each year.

Usually the festivities were celebrated with a service in the church.

This was followed by village dances, a market, a fair, betting games, and a large banquet.

One of the oldest (since 1608) and most traditional church festivals in Frankfurt is the "Bernemer Kerb" (Bornheimer Kirchweihfest), which is celebrated annually in the Bornheim district.

At it can be seen very nicely the change from the former Kirchweihfest to today's Volksfest.

You can learn more about autumn HERE

You can find the autumn holidays HERE