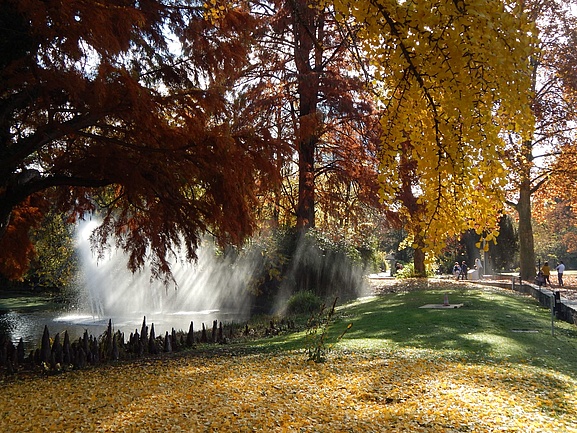 Autumn is the season between summer and winter.

The astronomical beginning of autumn is set in the northern hemisphere of the Earth around the time of the equinox on 23. September.

It ends on December 22, the time of the winter solstice.

In contrast to the astronomical, the meteorological autumn in the northern hemisphere is assigned to the months of September, October, and November.

All places therefore have Eharvest or harvest festivals take place

The autumn zodiac signs are Libra, Scorpio and Sagittarius.

Nature is changing: the days are getting shorter, it's getting light later and dark earlier. Evenings are getting cooler and longer, the power of the sun is noticeably waning.

During the day it is mostly still mild, but the nights are already cold and sometimes frosty.

We discover the first brightly coloured leaves on the deciduous trees.

On windy days, adults and children fly their kites.

Migratory birds prepare to depart for their southern wintering grounds.

Some mammals, such as squirrels, hedgehogs, hamsters, and bats are preparing for their upcoming hibernation.

Fall is also harvest time. The grape harvest is in full swing.

Weekly markets and shops beckon with the season's culinary delights.

These include freshly harvested vegetables and fruits, pumpkins and grapes, as well as mushrooms, poultry and game.

But the golden season is, above all, mushroom season. Mushrooms have hardly any calories, no fat, but are rich in fiber, minerals, and vitamins B and D.

Fall is also hunting season. That's why game and poultry meats are a special treat now

Fall is an amazing season in some ways: Yet in this time of dying and decaying, of retreat and solidification, an almost incomprehensible beauty and variety

The leaves of the trees (the foliage) turn colorful - yellow, orange, red, brown.

The same colors are found in the weekly markets, where autumn flowers, such as asters and dahlias, shine out at us in warm hues.

In the visual arts, the characteristic attributes in the often personified representations of autumn are often grapes and vines.