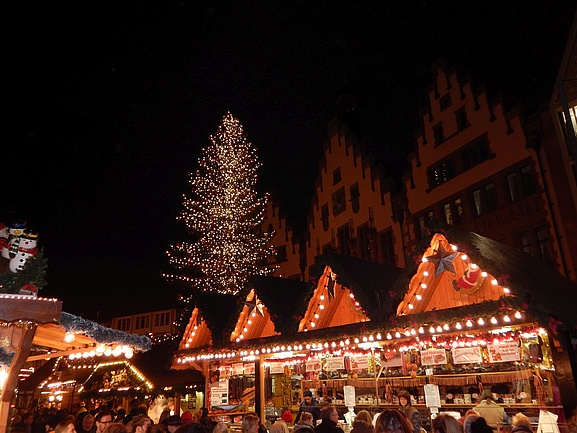 The Frankfurt Christmas Market is one of the oldest, most beautiful and, with over 240 stalls, also the largest in Germany. It is documented as early as 1393.

At one time the Christkindchesmarkt, as it used to be called, was a purely Frankfurt affair. No strangers were admitted, and so the market developed its independent character.

Until the seventies and eighties of the 19th century, it was common for Frankfurt parents to buy toys for their children exclusively at the Christmas market.

"Brenten", "Bethmännchen" and "Quetschemännchen" can look back on a centuries-old tradition as typical Frankfurt baked goods.

In earlier times, they were made in large quantities in the town houses of the city.

One of the greatest admirers of Old Frankfurt Christmas nibbles was Johann Wolfgang von Goethe, who, even as a privy councillor in faraway Weimar, received a package of his beloved "Brenten" from his mother every year for the feast.

The Swabian poet Eduard Mörike dedicated the Frankfurt "Brenten" even a long poem of seven verses, in which he even gives tips on how to make them.

Every year, the old town of the Main metropolis around Paulsplatz, Römerberg, Liebfrauenberg, Fahrtor and Mainkai is transformed into a romantic market during the pre-Christmas Advent season, the centrepiece of which is the approximately 30-metre-high Christmas tree festively decorated with hundreds of lights in front of the city hall, the Römer.

The landmark of Frankfurt's Christmas market, the Christmas tree, is annually one of the tallest in Germany at around 30 metres.

The smell of mulled wine, hot cider and roasted almonds are as much a part of the Frankfurt Christmas Market as the traditional baked goods and the varied accompanying program.

You can find the 2017 Christmas Market program HERE

On Saturday before the 1. Advent and Christmas Eve, all fifty bells of Frankfurt's ten inner city churches unite for a unique concert.

Christmas traditions around the world I

Christmas traditions around the world II