Finally Spring! Time for the Easter bunny to hop back through our gardens. When the chocolate Easter bunnies and coloured eggs dominate the displays in the shops, little sweet toothers are especially happy. But if we are honest, we ask ourselves far too seldom these days: What is the origin of Easter? Where does the term come from and which Easter customs are really traditional? 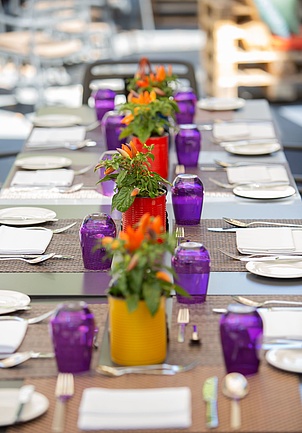 Start Easter Sunday with pleasure, enjoy a delicious brunch in a relaxed atmosphere - that's what you can do at Stock Avenue 81. Cold and warm specialities are waiting here to give you a tasty Easter.

Müslistation with dried fruits and toppings

Vitello of veal with tomato jam, rocket and pine nuts

Selection of leaf and raw salads, with condiments and various dressings

Stewed leg of lamb with root vegetables and Barolo

Before we deal with the history and traditions, we actually wanted to see how and where in Frankfurt Easter is celebrated, as in previous years, but in 2020 everything is different. Due to the corona virus, Easter festivals, the spring dipping mass, Easter services or the popular Easter fires are cancelled. All people are also urged to refrain from visiting friends and relatives. Easter 2020 will be quite different from what we are used to. But if we give up and use reason this time, we will hopefully soon be able to celebrate with our loved ones again!

So use digital offers for church services and for your leisure activities. Preferably visit the city in the form of videos from your sofa and let your Easter menu, but also have the Easter gifts from your local gastronomy and retail trade delivered to you.

Despite this serious crisis and the uncertain times, the entire Frankfurt-Tipp team wishes you a wonderful Easter. Stay at home and above all: Stay healthy!

Before we deal with the history and traditions, let us first look how and where Easter is celebrated in Frankfurt. First of all we will stay in Frankfurt:

A highlight in 2020 will be the Dippemess in spring, which traditionally starts shortly before Easter and of course is especially popular on the Easter weekend. But on Good Friday the Dipppemess is closed.

On April 09th there is a Easter market for children. From 14 - 18 o'clock you can do handicrafts here and play to your heart's content.

It will be full of atmosphere on 11 April. Already for the sixth time the IG Riedberg invites to the Easterfire. From 6:30 pm onwards, there is first of all food, drinks and stick bread, before the big fire is lit at about 8:30 pm.

On Holy Saturday, too, the traditional grosse Stadtgeläut. At 4:30 p.m., it starts!

On April 12 and 13, the Galerie am Palmenhaus in the Palmengarten will be transformed into Easter bunny garden. Here children can search for Easter eggs on Sunday from 11 - 18 o'clock and on Monday from 11 - 16 o'clock. This makes the palm garden the perfect place for a nice Easter outing for the whole family.

An extremely atmospheric Easter highlight is the Historical Easter market at the Ronneburg. On 28 and 29 March and 4 and 5 April 2020, historical traders and craftsmen from old guilds will be cavorting here from 11 am to 7 pm. In addition to the market, there is music, jugglers and a nice program for children. Every year during Easter time, the atmospheric Ostermarkt very popular. On 04. and 05. April 2020 numerous stands offer handicrafts, from Easter eggs in various variations, spring decorations and creative flower arrangements to felt work and natural soaps.

On the banks of the Rhine in Mainz-Kastel welcomed by Saturday, 11. April, until Easter Monday, 13 April 2020, a Medieval Easter Spectacle the visitors. Celebrate Easter with knights, witches and jugglers - a very special experience for the whole family!

Where does the term Easter come from?

The term Easter probably derives from Eastre, the Anglo-Saxon name of the Teutonic goddess of spring and fertility. Their feast was celebrated the day before the vernal equinox. Others think the word "Easter" is derived from "Eostro". The word means dawn and is derived from the word stem "ausos", which in Greek led to "eos", sun, and in Latin to "aurora", dawn.

However: Easter has always played a central role in the customs of the Central European tribes. The longing of the people for spring, sun and warmth, for securing the new harvest blessing, let them celebrate the spring festival of the equinoxes. The Christian Church has merged its most important feast, the Resurrection of Christ, through the Council of Nicea in 325 with the Spring Feast of the Germanic Cult of Light. Easter is also said to have replaced the Jewish Passover festival mentioned in the Bible, which suggests many similarities in the customs.

Thus it is not surprising that the word for Easter and Passover is similar or identical in a number of languages such as French, Greek, Italian and Spanish. Therefore Easter, which is celebrated today, is certain, as are many other Christian festivals (e.g. Pentecost) interspersed with pagan customs and rites. Easter, however, is in many countries synonymous with joy, happiness and festivity.

Easter is after Christmas (birth of Jesus) another central event of their faith for the Christians through the resurrection of Jesus. Death is not seen as the end, but as the new beginning of a new life. This is to show that life will triumph over death, truth over lies, justice over injustice and love over hatred.

In Christianity the Easter season lasts 50 days until Pentecost.

Before Easter, Lent is also called the Passion Time, which lasts 40 days and begins on Ash Wednesday. It recalls the 40 days Jesus fasted in the desert.

The last week before Easter is called Holy Week. It begins with Palm Sunday, on which Christians celebrate the entry of Jesus into Jerusalem.

On Maundy Thursday (the "green" comes from the Old German word "greinen", which means to cry) Christianity celebrates the Lord's Supper.

On Good Friday (Old High German "„kara", means lamentation, sorrow, mourning) the death of Jesus on the cross is commemorated, on Holy Saturday there is rest on the grave, and on Easter Sunday Jesus - according to the Bible - rose from the dead.

All other irregular holidays can be determined on the basis of the Easter Sunday calculation.

This has been the case since the 1st Easter Sunday. The calculation basis was modified by Pope Gregory XIII (1582), who replaced the "Julian calendar" by the still today valid "Gregorian calendar".

Easter in St. Peter's Square in the Vatican, more than 200,000 people crowd year after year to be there when the Pope, traditionally in the open air, reads the Easter Mass. At noon the Pope gives his Easter address to the faithful of the world. The highlight is the subsequent papal blessing "Urbi et orbi" (Latin: the city and the world).

Many rites and customs came into being at Easter.

Easter fires are lit on the evening of the 1st Easter day on fields and heights and shine far into the country.

Easter games have been performed in many places since ancient times. Always the content of the games is the victory of the awakening life over the darkness of wintertime. The Christian mystery play of the resurrection of Christ fits seamlessly into the pre-Christian spring customs that celebrated the awakening of nature with new life.

A number of Easter symbols, such as Easter eggs and Easter bunny, already existed in ancient times. Many were taken over by Christianity and are still today an important part of Easter.

The dominant symbol of our Easter is still the Easter egg.

Eggs are said to have been given away and eaten red as fertility symbols at the spring festivals in ancient Egypt, Persia, Greece and Rome.

The church consecration of eggs can already be detected in the 4th century. In this time eggs were already painted colorfully, as finds from the area of Worms show.

To distinguish them from the fresh eggs, plants were added to the water. The juice of onions, spinach or beetroot provided the first colourful Easter eggs.

The egg is the source of life itself and stands as a symbol for the development of life. Cooking them at Easter probably originates from their use as currency in the 12th century. Since one traditionally paid one's debts on Maundy Thursday, many eggs were saved up until this day and preserved by cooking.

The Easter Egg is a hen's egg, mostly coloured with natural plant colours, sometimes painted with motifs, which is traditionally given away or eaten at Easter.

Blown and often elaborately painted or pasted eggs are used as decoration at Easter. Famous for their pomp and also expensive are the jewel-studded Easter eggs of Fabergé.

The hiding of Easter eggs dates back to the 17th century. The church consecration of red Easter eggs was first attested in 1553. The Easter bunny is a rabbit in the customs, which paints eggs to Easter and hides in the garden.

Both the Greek goddess of love Aphrodite and the Germanic goddess of fertility Ostera were assigned a hare as a sacred animal. First evidence for the Easter bunny from the year 1678 is handed down by Georg Franck von Franckenau, a professor of medicine from Heidelberg. More than three hundred years ago, the custom originated in Alsace, the Palatinate and the Upper Rhine. In Zurich, the Easter bunny has been handed down from old records as an egg bringer. Also the termination of Easter allows a connection to the rabbit. Easter is celebrated on the first Sunday of the spring full moon and the rabbit is considered the moon animal.

However, the Easter bunny is not the only bearer of Easter eggs.

In Schleswig-Holstein, Upper Bavaria and Austria the rooster, in the Westphalian or Hanoverian region the fox, in Switzerland the cuckoo, in Thuringia the stork was regarded as the bearer of the eggs.

In German folklore there are many small, mostly funny verses about the Easter bunny, like for example:

Cleans the beard and sharpens the ear,

Make a male look out.

Then jump away with one sentence

And a little cheeky sparrow

And what is it? One Easter egg!

Easter bunny, come to me,

come to our garden!

do not let us wait so long!

Place them in the green grass,

Bring something to children.

for a nice Easter party.

Behind birches, behind beeches,

we want to look for the eggs.

Easter was also a topic for Frankfurt's probably most famous son, the poet Johann Wolfgang von Goethe. Especially of course in the Easter walk from Faust I. It says:

„Streams and streams are

In the valley, hopeful luck greens;

The old winter, in its weakness,

From there he sends, fleeing, only

In streaks across the greening corridor.

But the sun does not tolerate white,

Everywhere education and striving are stimulated,

All she wants to do is to enliven everything with colours;

But there are no flowers in the area,

she takes cleaned people for it.

Turn around to see back from these heights

From the hollow dark gate

Everybody likes to sunbathe today.

They celebrate the resurrection of the Lord,

For they themselves are resurrected:

From low houses to dull chambers,

From craft and trade gangs,

From the stress of gables and roofs,

From the streets squeezing confinement,

From the churches of Venerable Night,

Are they all brought to light.

Look only, see! how behaving the amount

By the gardens and fields smashes,

Some a funny barge moves,

And, overloaded to the point of sinking,

This last barge is moving away.

Even paths far from the mountain

Blink colored clothes on us.

I already hear the turmoil of the village,

This is the true heaven of the people,