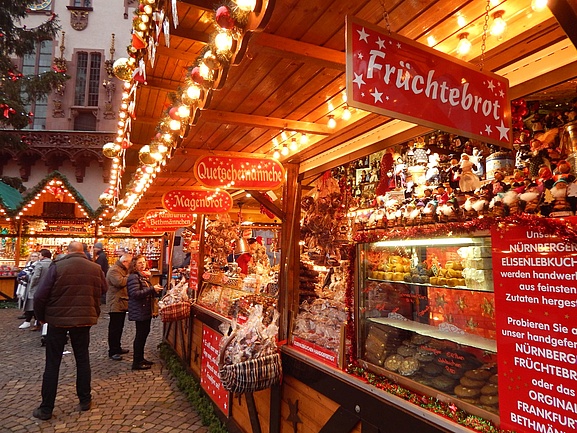 Frankfurter Weihnachten ohne Bethmänchen? Without haddock cake, squeeze cake or Brenten? Actually, it's unimaginable, isn't it? Fortunately, there are many markets during the Christmas season where you can enjoy these delicacies or buy them as souvenirs.

But maybe you would like to try some of these Frankfurt specialities yourself. In this part of our Christmas Special we'll introduce you to the city's tastiest pastries and tell you some helpful recipes.

No Frankfurt Christmas platter should be without the round Bethmännchen.

The typical Frankfurt baking speciality can look back on a long tradition.

The "inventor" of this delicious snack is Jacques Gautenier, who came to the Main from the Seine to cook for Bethmann's family of bankers.

Jacques mixed marzipan, finest sugar and egg whites, seasoned with lemon dust,
a solid mass, formed small balls from it and put them on the baking tray.

The name comes from the Bethmännchen of Frankfurt City Councilor Simon Moritz von Bethmann. The number of almonds stand for his sons.

Initially 4 almonds were pushed into the balls as substitutes for the sons Moritz, Karl, Alexander and Heinrich.

When Heinrich died young in 1845, the fourth almond was omitted.

A Bethmännchen recipe can be found HERE

The typical Frankfurt baking speciality can look back on a long tradition.

The "Brenten" were already proven to be one of Goethe's favourite dishes, and his mother gave him a parcel with the "Naschwerk" every year as a secret counsellor in faraway Weimar.

Even the Swabian poet Eduard Mörike could not leave the "Brenten" in Frankfurt. He even dedicated them a long poem with seven verses in which he also gives prescription instructions.

A recipe for Frankfurter Brenten you can find HERE

Beside "Brenten" and "Bethmännchen", the "Quetschemännchen" can also look back on a centuries-old tradition as a typical Frankfurt Christmas speciality.

In earlier times, they were manufactured in large quantities in the townhouses of the city.

On Frankfurt's traditional Christmas market, you can of course also find the squeeze men, as the plum men are called in "Frankforderisch".

In earlier times there was a special reason for this with the males composed of prunes and nuts (nowadays, of course, there are also females).

It was customary in ancient Frankfurt for young men of their loved ones to send a bruiser male.

If it kept the courted lady of the heart, the youngster might be sure of her affection.

But if she sent it back, he was “rebuffed".

Christmas customs from all over the world I

Christmas customs from all over the world II

Eduard Mörike: Poem about the Brenten

Mandeln erstlich, I advise you,
Take three pounds, better four (proportionally at will);
These will now be poked
And rubbed with ordinary rose water finest.

Je on the pound of almonds accurately
Three quadruplets of sugar without mercy'!
Like the same in the mortar',
Swing it through a hair sieve.

From your earthen vessels
Then should you select me a thing,
What else one calls a tile,
But be it new to this end'!
Therein we fill the whole junk
And add fresh coals.

Stir now and stir without stopping,
Until the mass thickens,
And stir for one hour!
At the dipped finger should
The smallest should not get stuck anymore;
That's how long we have to do it.

Now put the sled
in a bowl (the poet,
Because he likes the rhyme most of all,
Will, worse, here a model,
Indes the cook insists on the former.)

Darinne's together press well!
And so it has rested overnight,
You should knead it bit by bit,
Shafting knife-back thick.
The less flour you sprinkle,
The better it will be.)

Then in moulds be embossed,
How to care for baked wine;
Last but not least - that's the way things are done -
The baker is taken in hot duty,
That they come nice yellow from the oven!