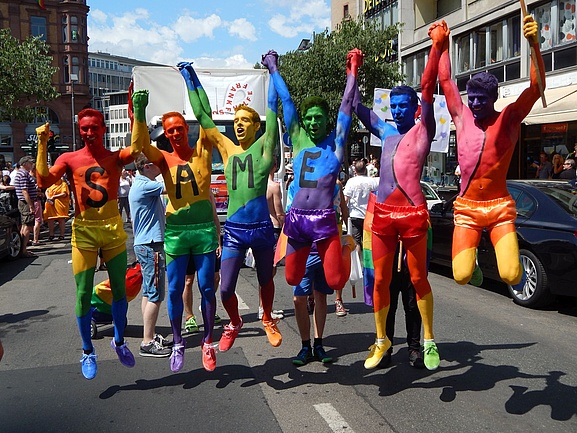 Frankfurt likes to show its tolerant, cosmopolitan side. There are many places in the city that are a sign of the colourful, tolerant Frankfurt. Whether clubs and bars, sauna or shopping - in this special we have put together some tips from the gay scene of the city for you.

From 19 - 21 July 2019 Christopher Street Day took place again in Frankfurt. This year the event was dedicated to the 50th anniversary of the Stonewall Riots, the origin of the worldwide CSDs. The highlight in 2019 was, of course, the large, colourful demonstration train through Frankfurt's city centre, which ran through the city centre from Römerberg on Saturday. It was again a great, peaceful, colorful and very important event!

The Club Karlson in the Bahnhofviertel offers its guests a wide range of events to appeal to everyone who loves to dance. On some evenings, special gay parties are celebrated here, such as the CSD.  Through these parties the club has established itself as a popular meeting place for the scene.

The Orange Peel is characterised by a very varied programme offer for a colourful audience, from improv shows to jazz and dance, everything is represented here. Gay parties such as the 1001 Gay Oriental Night or Milk’n’Cream are also regularly on the programme, where you can celebrate in a relaxed and exuberant way.

Frankfurt's „funniest pub“ welcomes not only gays from all over the world, but all those who want to join in the celebration in a happy, peaceful and tolerant way. A versatile beverage menu, many beautiful events and a neighbourly atmosphere underline the good reputation of the pub far beyond the scene.

An institution in Frankfurt for all women who love women. Since 1971, La Gata has been inviting its exclusively female audience in Sachsenhausen to a relaxed get-together, whether simply with a relaxed drink after work or at one of the great events that the owner Ricky regularly offers. A mixture of bar, pub and club with a high fun and feel-good factor!

The bar for gays and friends convinces with a cosy, modern ambience. In addition to the daily bar offer, changing parties take place here again and again. So you can spend here not only comfortable hours, but also wild times.

Since 1988 SWITCHBOARD has been known and loved as a bar, café and meeting place for AIDS-Hilfe Frankfurt. Not only the pleasant atmosphere, but also the varied programme of events are convincing. In addition to karaoke and readings, there are exhibitions, an open stage, films and speed dating. In short: In the SWITCHBOARD there is always something to experience.

The Lucky*s is one of the oldest scene bars in Frankfurt. It is open daily from 3 p.m. and offers coffee and cake in a familiar atmosphere as well as delicious cocktails or a beer. Especially popular is the Karaoke evening (Tuesdays) or the BEAR LOUNGE every first Saturday of the month.

This bar is daily (except Monday) from 22 o'clock meeting point for homosexual men. For 40 years, the pub in the rustic vaulted cellar has been one of the city's most traditional trendy pubs. A special feature: As the only gay bar in Frankfurt, the STALL is also a meeting place for the leather and fetish scene.

A relaxed aroma steam bath, hamam or traditional sauna is just as possible here as swimming in the 11 meter long pool or relaxing in the whirlpool. For those who want to experience even more, there is an extensive cruising area with cinemas and glory holes. Beside the normal offer there are regular events and special offers. And every second Monday of the month it's Bi Yourself. Then everyone is welcome here, no matter if woman, man, transgender, gay, lesbian, gay, BI or hetero!

Open every day from 12 a.m. to 7 a.m., the Metropol Sauna near Frankfurt's Konstablerwache offers pure sauna enjoyment. In addition, massages and special events such as the foam party, the bi-happy or the bar party Freeplay are organised. In addition, there are other attractive offers such as private cabins, a bistro, fitness facilities or the 6-seater card, which is recommended for visitors who want to come here more than once.

For 50 years this gay sauna with restaurant and bar (which can also be visited without sauna) has been inviting you to Sachsenhausen. You can relax in a cultivated ambience in a dry, bio and steam sauna. A whirlpool and a shower room are also available. In quiet rooms with single and double cabins you can retreat discreetly. Trained specialists also offer sports or relaxation massages.

Bäppi La Belle's shows have been cult in Frankfurt for 25 years! With typical Hessian cordiality, evil tongue and disarming charm, Bäppi La Belle has been bringing something to the inclined audience for a quarter of a century that is becoming more and more valuable today: Just have a good time in a good mood. Until May 2019 the Bäppi show will be at home in Theatrallalla in Nordend, starting in September it will go on tour through different locations.

For 25 years Vanessa P. has been giving the Frankfurt travesty scene a good portion of glamour. Vanessa P. regularly presents the Revue „Showgirls“ with wit, tongue-in-cheek self-irony and music, with which colleagues and newcomers also appear on stage. This is pure good mood with a lot of classic revue charm.

The Night Queens, presented by Frankfurt's travesty star Jessica Walker, regularly present their audience with a colourful mixture of glamour, slapstick and entertainment. An evening that offers a little comedy, a pinch of Varieté, a portion of live singing and of course lots of classic travesty entertainment.

The center sees itself as a meeting place for teenagers and young adults of all sexual orientation from 14 to 27 years. Open Café evenings, queer entry meetings to facilitate a first visit to the KUSS41, personal consultations or various projects are on the youth centre's list of offers.

Consulting, prevention, information and communication - these are the keywords that summarise the services offered by AG36. These are offers of the AIDS-Hilfe Frankfurt, which are mainly aimed at gay men. Education and information should help to improve the living conditions of gays in Frankfurt.

LIBS is the “Lesben Informations- und Beratungsstelle e.V.“ in Frankfurt. Since 1992, the counselling centre has set itself the goal of counteracting the causes and consequences of social discrimination and exclusion of lesbian and bisexual girls, women and transgender people. Advice, events or group offers and many other offers are on the programme here.

Transnormal - this is the ladies boutique for men. Here you will find everything you need to live out your feminine side. Owner Manuela Mock offers her customers a selection of dresses, blouses, skirts, shoes, wigs, lingerie, stockings and pantyhose. But also waist corsets, laced corsages, silicone breasts and make-up can be purchased here. Personal make-up courses are also possible by appointment.

The specialist shop in Frankfurt for all lovers of lacquer and leather. Women and men will find everything their heart desires here, from laced corsets to seductive fashion in exciting fabrics such as wetlook or nylon to fashion and accessories for steampunk, fetish or burlesque.