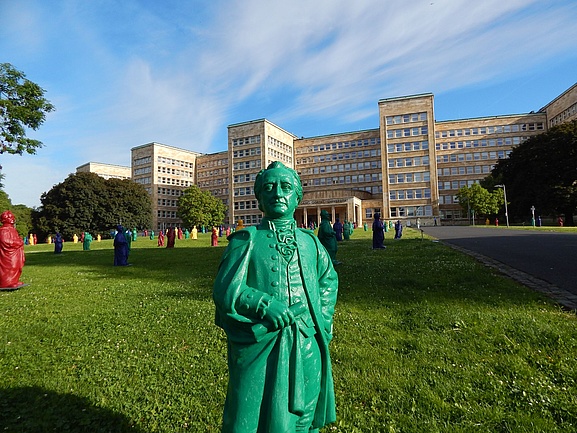 Goethe is the shining light of German literature.

He shaped Sturm und Drang and, with Schiller, Weimar Classicism.

With the tragedy Faust, Goethe created a drama for humanity of timeless validity and world literary rank.

Goethe loved many women in his life. They were also always an inspiration to him for new poetry.

Less well known were his scientific activities, which at times seemed more important to him than his literary work. Goethe discovered the intermaxillary bone in humans in 1784. 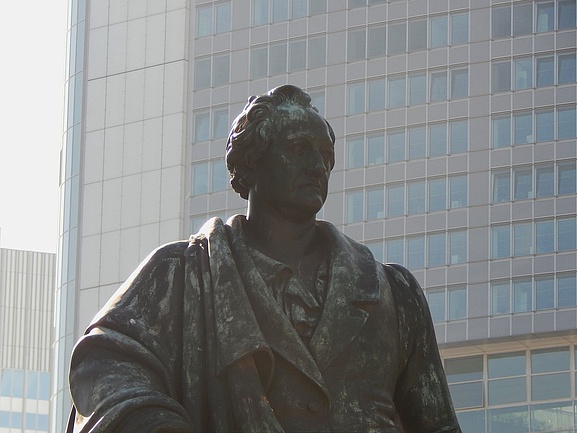 The son of Imperial Councillor Johann Kaspar Goethe and Katharina Elisabeth, Goethe studied law in Leipzig and Strasbourg from 1765 at his father's request.

After completing his studies in the autumn of 1771, Goethe worked as a lawyer in Frankfurt.

But Goethe preferred to devote himself to his first drama and wrote some poems. He also collaborated on the critical organ of the Sturm-und-Drang movement, the "Frankfurter gelehrten Anzeigen".

With his first novel "The Sorrows of Young Werther" and the drama "Götz von Berlichingen" (both published in 1774), the 24-year-old Goethe achieved his literary breakthrough.

In 1775 he followed the call of the young Duke Carl August to the Weimar court, where he took on political duties (in finance, mining and road construction). Later he was offered the direction of the theatre and the supervision of education.

In Weimar Goethe became friends with Charlotte von Stein (1742-1827), to whom he wrote more than eight hundred letters over the years.

In 1776 he was appointed privy legation councillor, in 1779 privy councilor, and in 1782 Goethe was ennobled by Emperor Joseph II.

In September 1786 he made his first trip to Italy. In Rome he visited the painters Tischbein (who painted one of the most famous portraits of the poet "Goethe in the Campagna") and Kauffmann.

It was not until June 1788 that Goethe returned to Weimar, where he became engaged to Christiane Vulpius, whom he also married in 1806.

Goethe gave up all state offices except the directorship of the court theatre. His second trip to Italy followed in 1790.

The period thereafter is marked by his collaboration with Schiller. The two developed a style that became known as Weimar Classicism.

After the deaths of Herder, Schiller, and Wieland, Goethe made new friends, including Humboldt, and became involved with Fichte's transcendental philosophy.

At the Erfurt Congress of Princes, Goethe met Napoleon in 1808. In the same year he published the first part of Faust.

In 1812, during a stay at a spa in Karlsbad, he met the composer Beethoven.

In 1815 Goethe made extensive travels in the Rhine-Main area. He spent the period from 12 August to 17 September 1815 with the married Marianne von Willemer in Frankfurt.

In December 1815 Goethe was entrusted with the office of minister of state.

After the death of his wife Christiane (June 6, 1816), Goethe withdrew from Weimar social life and turned to his works.

On March 26, he was buried next to Schiller in the Weimar princely crypt.

His most important works: 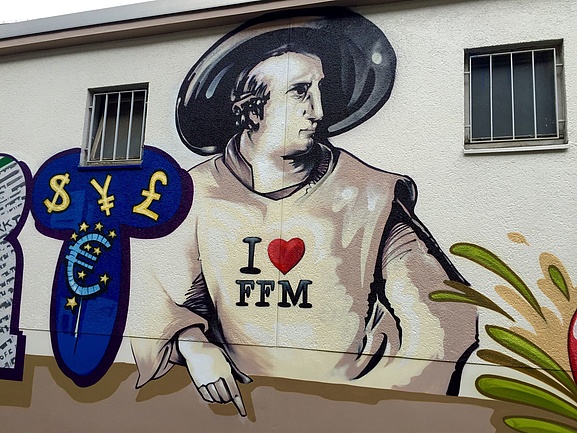 Even today Goethe is present everywhere in the city. Especially, of course, in the Goethehaus and the Goethemuseum, but also along the Goethewanderweg, aufd em Goetheplatz, at the unfortunately burned down Goetheturm (but which is to be rebuilt), at the Johann Wolfgang Goethe University and, of course, in souvenir shops, bookstores or at the beautiful murals behind the Kleinmarkthalle.

Goethe and Frankfurt - they simply belong together!

"In a city like Frankfurt one finds oneself in a whimsical situation, ever crossing strangers pointing to all corners of the world and arousing wanderlust." - (Johann Wolfgang von Goethe in Dichtung und Wahrheit IV, 18)