Tips for going out at the turn of the year 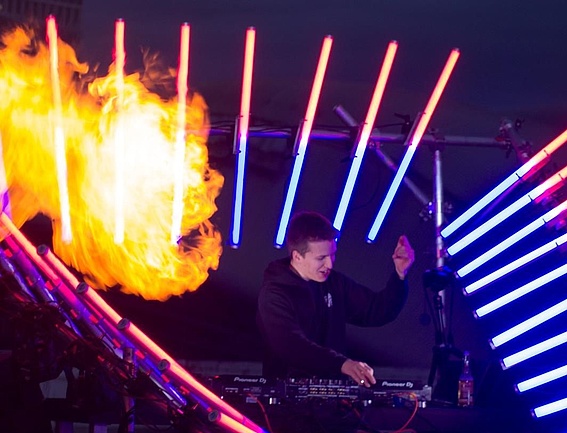 Together with the two Frankfurt DJs FR3DO and Voito, Frankfurt-Tipp.de will bring party mood to your home on 31.12.2020 from 8pm! From the roof of the multi-storey car park at Hall 4 of Messe Frankfurt, the DJs will be serving up two sets for the turn of the year, ensuring that you can dance and party to your heart's content even in the smallest of circles.

Once again, we're not letting anything spoil the fun this year. And of course, that includes singing into the New Year, with the greatest hits and a terrific party. This is also possible alone or in a small circle with the big online RUDELSINGEN party on 31 December. For the turn of the year, there are two teams on the digital stage at once, David Rauterberg and Matthias Schneider as well as Simon Bröker, accompanied by David Rauterberg.

Favorite hits of RUDELSINGEN fans, rock classics, Neue Deutsche Welle, Schlager - the program of the evening starts at 7 pm and leaves no wishes or dance styles out. For around four hours, thousands of attendees can join in the singing, as they did on the Christmas holidays, and shorten the countdown to the turn of the year with this live event.

And should the neighbors knock with so much joie de vivre and concentrated vocal power - the link for the free event can be accessed with any smart device and is available free of charge at www.rudelsingen.de or on the YouTube channel https://www.youtube.com/c/DasOriginalRUDELSINGEN available.

Where did the name come from?

As with all holidays, various customs and superstitions are associated with the turn of the year. Dinner on New Year's Eve should be with family or friends, because eating "in the circle"of one's nearest and dearest symbolizes protection from demons who cannot destroy that circle.

The night of the New Year has been about warding off evil spirits since time immemorial. Crackling, noisy parades with hooded figures with drums, bells and whip cracks for the necessary noise provided, should these keep away.

Nowadays this custom is replaced worldwide by gigantic fireworks. However, this is no longer about driving away demons. Rather, New Year's Eve fireworks are an expression of joy for the upcoming new year. Young and old alike enjoy the colourful spectacle in the sky. In Germany alone, bangers, firecrackers, gushers and especially rockets are blown up year after year at a cost of more than 60 million euros.

Bangers, fireworks, church bells, waltz music and champagne corks - noise and music are as indispensable to most cultures as congratulations.

"A happy and blessed new year!" - so or so similar are the typical greetings or wishes for the New Year.

In the private environment, however, one usually wishes "a happy new year". Whereby the "gute Rutsch" has nothing to do with a "Hüberrutschen" into the new year. The expression goes back to the Hebrew word "rosch" which means "beginning", that is, the beginning of the new year.

Once the first seconds of the new year have dawned, people at New Year's Eve parties toast with a glass of Champus and say "Prosit Neujahr" or "Prost Neujahr".

The word "Prosit" is Latin and means "es may succeed".

All these New Year's wishes express the hope that the new year will bring good luck.

A fledgling custom is to bid a running farewell to the old year. Thousands of people take part in the increasingly popular New Year's Eve runs. The world's oldest and most important New Year's Eve run takes place annually in S&atilde;o Paulo in Brazil. Of course, the Main metropolis also has "ihren" Silvesterlauf. The Spiridon New Year's Eve Run has been held for over 30 years.

A whole host of interpretations and good luck charms continue to influence New Year's celebrations to this day. These customs have been part of the magical thinking and actions of traditional societies since time immemorial. They revolve around saying goodbye to the old year and welcoming the new.

The background to the boisterous, sometimes debauched celebrations is the hope for fertility and prosperity in the new year.

Widespread is the "lead pouring" shortly after midnight. In a specially designed spoon, a piece of lead is heated over a candle flame, melted, and then quickly dropped into a vessel of cold water. From the shadow of the resulting figures one believes to be able to interpret the future.

At the turn of the year lucky charms are booming

Popular are the "Glückspfennige", which according to. The old folk wisdom "who does not honor the penny, is not worth the thaler", could maintain their lucky meaning until today.

The lucky penny, in times of the euro actually lucky cents, but hardly anyone says that, is a symbol of wealth. By giving it as a symbolic gift, one wishes the recipient never to run out of money.

The horseshoe, on the other hand, is a talisman to protect house and yard and to keep strangers from entering.

In earlier times, it was also nailed to ship masts - even Admiral Nelson made sure that the "Victory" did not set sail without this lucky charm.

Chimney sweeps or chimney sweeps are considered lucky charms because they were always the first to walk through the streets on New Year's morning congratulating the New Year.

Luck also comes from the flower pot. The speech is of course from the four-leaf clover, the "Glücksklee", which is supposed to bring luck according to popular belief. he mysterious shamrock actually comes from Mexico and inspires secret wishes and hopes at the turn of the year.

Widespread are also lucky pigs, mostly made of marzipan. Even for the ancient Germanic tribes, the boar was sacred. The pig is considered a symbol of fertility and thus a sign of prosperity and wealth. "To have had a pig" means with us that one has had a lot of luck. Among the Greeks and Romans, anyone who had a lot of "pig" was considered privileged and well off.

The ladybug is considered the messenger of heaven to the Mother of God, hence the name. Protects children and heals the sick when he flies to them. Never shake it off or even kill it - that brings bad luck.

You can play it quite safe by adding up the lucky charms.

The trade has long specialised in marketing, the superstition that is still widespread in modern times. Even in the supermarket you can buy lucky pigs made of marzipan, ladybugs made of chocolate, small pots of lucky clover decorated with a chimney sweep or a lucky penny.

Egal, if it helps, think certainly many, and ultimately, as is well known, faith also moves mountains. ;-)

Some tips on how to avoid the infamous hangover ;-)

Fatty foods slow down the absorption of alcohol in the blood. Have a high-fat meal for a change before the drinking binge.

Stay to one type of alcohol, as the mess of drinks guarantees a buzz.

Shun the dark drinks, such as red wine, brandy, cognac and whisky. Because they cause the worst headaches. Rather reach for white wine or vodka.

Nibble on crisps, nuts and pretzel sticks to compensate for the loss of minerals caused by alcohol.

You wake up the next morning or even at noon, your skull is buzzing, and the headache is nearly killing you?

Then the only thing that will help is a hangover breakfast.

Take a long walk instead. Plenty of fresh air is guaranteed to get you in shape.

Happy New Year to you