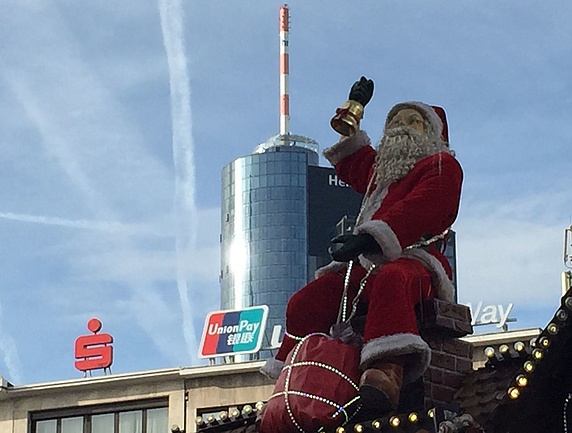 The character of St. Nicholas is fictional.

The legendary Nicholas is an amalgamation of two historical figures: the bishop Nicholas of Myra in Lycia, Asia Minor, who probably lived in the 4th cent. and the eponymous abbot of Sion, who was bishop of Pinora, and died in Lycia on 10 December 564.

From these two historical persons developed the figurative figure of St. Nicholas found in legends from the 6th century onwards. Century in legends found fictional figure of the miracle-working bishop of Myra.

St. Nicholas has always been one of the most popular Christian saints.

In the Orthodox Church, his veneration has been recorded since the 6th century, when Justinian I built a church dedicated to him in Constantinople.

The cult of St. Nicholas came to Germany in the 11th century, probably through Theophanu, the Byzantine wife of Otto the Second.

From the 17th century onward. St. Nicholas was given fearsome helpers as companions.

In Germany Knecht Ruprecht, in Switzerland Schmutzli, in Austria the Krampus, in Luxembourg the Housecker, in the Netherlands the Zwarte Piet.

The commemoration of the Bishop of Myra is of Catholic origin and was abolished by Martin Luther.

But the custom lives on to this day.

In other countries, Nicholas is also known by the following names:

He was also once the gift-bringer at Christmas.

In Central Europe, he was increasingly supplanted by the Christ Child (a fictional character invented by Martin Luther, who used it to support his plan to abolish Saint Nicholas).

Later the Christkind was replaced by Santa Claus and in modern times increasingly by the American Santa Claus.

Since 1555, Nicholas has been recorded as bringing gifts to children.

The Protestant theologian Kirchmeyer wrote: "Before St. Nicholas Day, mothers lay out gifts and a rod for their children".

At that time, St. Nicholas gave children gifts of nuts, Kletzenbrot, and dried fruit, as well as clothing and other useful items for everyday life.

Even today, millions of children put shoes, boots or plates outside their doors on St. Nicholas' Eve (12/5) or St. Nicholas' Day (12/6), which varies regionally in this country, so that the Holy Man can fill them with peanuts, tangerines, chocolate, gingerbread and other goodies as he makes his way through the night.

Meanwhile, St. Nicholas doesn't just bring gifts: in many areas, he gives gifts and praise to the good children, while rebuking and punishing the bad ones by beating them with a rod.

Which children were good and which were bad last year he reads in his "golden book".

Many parents invite volunteer or paid Santa Clauses to deliver such a "sermon"to the children at home, but it always ends with a gift-giving.

Many children send letters to St. Nicholas, Christ Child or Santa Claus in the run-up to Christmas.

These are collected in specially set up Christmas post offices and most are answered.

In Germany, for example, people write to. to the Christmas village Himmelpforten. Tens of thousands of letters from all over the world have been answered there since 1966.

The most well-known custom to the Nikolaustag is that that the children their cleaned shoes or also stockings on the eve to the window or before the door place and/or. and St. Nicholas fills them overnight with sweets and gifts

Already in an old verse it says:

"Santa Claus, put in for me,
what thy good will may be.
Apples, nuts, almond kernels
little children love to eat!"

NIKOLAUS-POETS can be found HERE