A very special stall magic over the rooftops of the city

Frankfurt, 18:00 hrs. For many working people, it's finally the end of the day. On the Zeil numerous people cavort to do the last shopping of the day and or make themselves on the way home. The Konstablerwache multi-storey car park is also highly frequented at this time. In order to get to the fifth level, one has to either squeeze into one of the small elevators or walk up through the staircase that is not exactly inviting. Now you may be wondering. Why would I do that? You won't need to answer when you arrive at parking level 5, follow the glow of the lights to a staircase and climb up these last steps to the roof.

The reaction of visitors entering the roof of this multi-storey car park for the first time is actually always the same: you stop, your eyes get bigger, start to glow, while your hand automatically reaches for your mobile phone to take a picture. Afterwards the festively illuminated stall magic is explored. Beside the CityAlm, about which we have reported here, the beautiful CityXmas Christmas Market is at home until 31 December, where in summer the CityBeach with sand, deck chairs and beach bar provides a holiday feeling in the city centre. “The location was a real stroke of luck“ says Jasmin Ziegler, who set up this Christmas market above the rooftops of Frankfurt. After four years in the Thurn und Taxis Palais, a new location had to be found last year. Then came the offer of the makers of the CityAlm, who had been looking for an opportunity to play on the area around the wooden hut, just in time.

She had taken full risk, said Jasmin Ziegler, and had immediately sealed a cooperation for several years, not knowing whether the concept would be accepted by the people of Frankfurt. But after about two weeks CityXmas is clear: It works! The reasons are quickly identified: On the one hand, of course, there is the combination of festive lighting at the stalls or the Christmas trees set up throughout the grounds with the magnificent view of the Frankfurt skyline. In the dark this creates a very special atmosphere, which is not to be found at the numerous markets “am Boden“.

On the other hand the concept of CityXmas makes the parking garage roof the perfect after work location. There are no stalls with handicrafts and the like, only gastronomy. Many of those who are here have already proven themselves at the Christmas markets in the Thurn und Taxis Palais. For Jasmin Ziegler, one thing was clear from the start: unlike other Christmas markets, every stand here is allowed to sell mulled wine. But the quality of the food offered must also be right for this. Only fresh ingredients are used and there are no disposable products. The visitors should feel comfortable here and should want to come back – best with many friends and acquaintances in tow.

Already in the first weeks has become clear: The risk taken by Jasmin Ziegler and her team has paid off. The CityXmas market has become a popular meeting place. And although there is a great feel-good atmosphere here even when the weather is not quite so great, which attracts many visitors, the atmosphere always remains familiar.

THE FURTHER TEXT REFERS TO THE CITY XMAS 2017.

ALL INFOS ON CITY XMAS 2018 FIND YOUR HERE 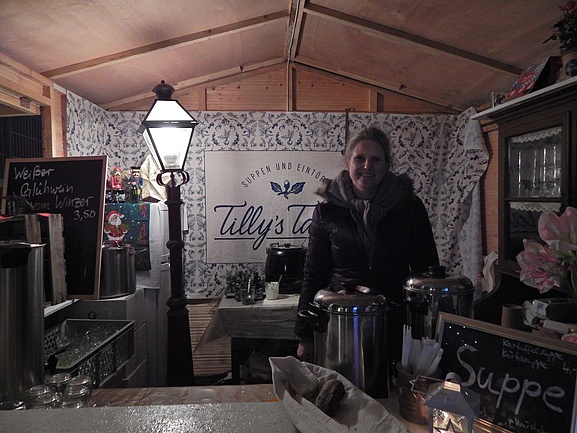 Normally Sibylle Rumpf offers her delicious soups and stews from her beautiful food truck, a vintage Renault Estafette, built in 1976. For the CityXmas she moved to one of the market stalls, which of course changes little in the quality of her soups. The potato soup we tasted not only perfectly dispelled the cold from the inside out, but also tasted really good. Beautifully creamy and finely seasoned, so that the taste of the potatoes was not masked but intensified. A piece of bread and the soup enjoyment is perfect. You'll also get white mulled wine here.

You can find more information about Tilly`s aunt under: http://www.tillystante.com/ 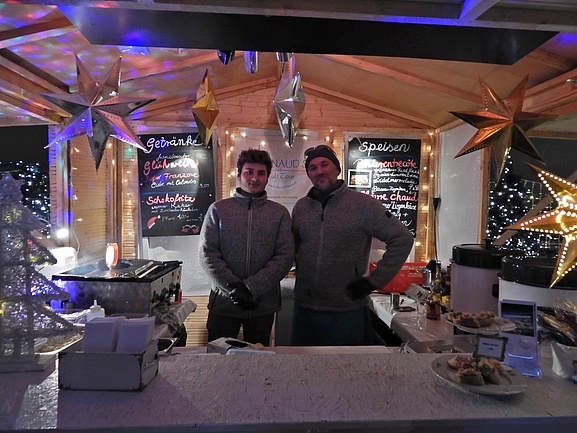 “With a bite in France” is the motto of Arnaud`s CultTour. And not only in the food truck, but also on the CityXmas market. French baguette sandwiches of the particularly tasty kind can be found here. For example the beef entrecôte with fried beef, tyme lime cream and onion jam. Bacon or goat cheese can be chosen as an extra. Chèvre Chaud is also on the menu. Here warm goat cheese with honey and walnuts spoils your palate. To drink you will find French mulled wine and chocolate chips – a warm cocoa with cinnamon cream. Mmmmmhhhhhhh…. 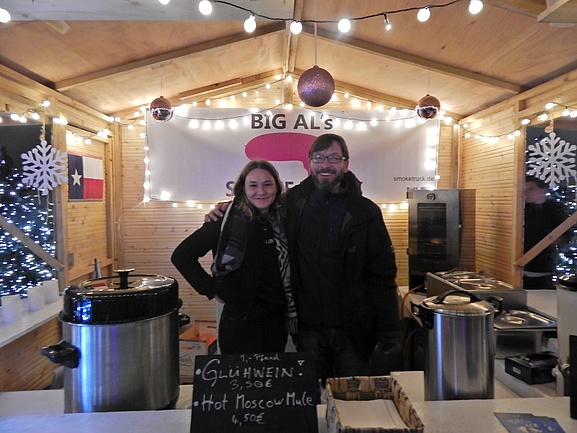 The team of Big Al`s Smoke Truck makes your mouth water with Pulled Pork and Pulled Beef. The Pulled Beef Burger with Jalapeño sauce and coleslaw is wonderfully spicy and juicy. The meat is tender and melts on the tongue. The whole thing can be washed down here with mulled wine or a Hot Moscow Mule.

You will find more information about Big Al`s Smoke Truck under: www.facebook.com/smoketruck 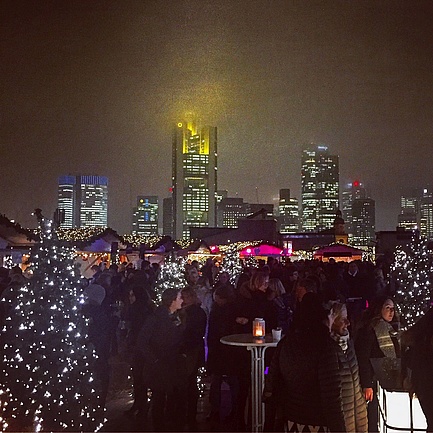 Additionally, according to one visitor, there is also the “most delicious Flammkuchen in the world“, very good apple wine, sweet crêpes, hearty from Russia, chestnuts and other delicacies at a total of twelve huts. Until 31 December you can enjoy this culinary Christmas market with a skyline view – over and over again! It's worth it!

Address: Use Konstablerwache parking garage entrance at Carl-Theodor-Reiffenstein-Platz, then up to parking deck 5.

More info can be found HERE