Love is in the air. Yes, also in Frankfurt the hearts of all lovers beat faster year after year on February 14, when on Valentine's Day love is celebrated with letters, poems, flowers and small gifts. No question, not only for Americans, Brits and French, but increasingly also for us Germans, Valentine's Day is mandatory date for a declaration of love. Not only the flower shops and the manufacturers of sweets, love locks and greeting cards are happy, but also department stores and the mail order business. And Valentine's parties are also becoming increasingly popular.

But some people also discover their romantic streak, write love poems or even propose to the one they love. No wonder that the registry offices on Valentine's Day are regularly booked far in advance.

Real tradition and high importance has the Valentine's Day in the U.S. but also in our neighboring countries France and Belgium, as well as on the British Isles. However, especially the Americans have a significant share in the spread of today's "Valentin-Kultes". As romantic as a declaration of love on this day can be, it is clear that commerce also plays a weighty role. Not without reason, the question arises: "Is Saint Valentine rather the patron saint of all florists or yet the patron saint of lovers?"

Who Saint Valentine really was, or whether he existed at all and where you can celebrate Valentine's Day in Frankfurt, you can find out in our special. 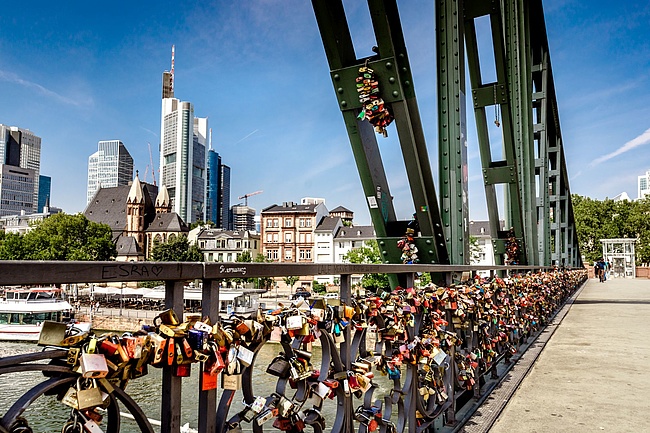 Yes, Valentine's Day will also be different than we know it this year due to the Corona pandemic. A candlelight dinner at a restaurant is just as impossible as celebrating together at a Valentine's Day party or snuggling up in comfy movie theater seats. Nevertheless: In Frankfurt you can celebrate Valentine's Day in many different ways, even at the Lockdown. Whether you put a love lock on the Eiserner Steg, prepare a home-cooked dinner for your sweetheart or surprise her/him with homemade chocolates (you can find a nice tutorial for example.HERE), together on the couch your common favorite movie enjoys or the day relaxing with a self-made cocktail (suggestions for this you can find HIER or HERE) - there are multiple ways to celebrate your hearts finding each other on this day.

Some special Valentine's Day tips for 2021 can be found here:

Valentine's Day at the drive-in:

A touch of normality - that's what the drive-in Gravenbruch offers you. On Valentine's Day, lovers can enjoy the romantic comedy CRAZY, STUPID LOVE with Ryan Gosling, Emma Stone and Steve Carell on the big screen here at 6:15 pm.

Frankfurt City Events invites you to a digital walk with Silke Wustmann, who will introduce you to the romantic sides of the city. For 12 euro; you can enjoy the romantic city walk quite relaxed from the sofa.

At the Städelmuseum on February 14, you can participate in an online session that invites you to relive Max Beckmann's time in Frankfurt. It starts at 7pm. More info and tickets are available HERE

But also other museums offer digital offers that allow you to experience a little culture together on this beautiful day. Recommended ones include the BACK TO THE FUTURE exhibition at the Museum für Kommunikation, the Colored Gods at the Liebieghaus, Simply GREEN at the DAM, THE SOUND OF DISNEY at the Deutsches Filmmuseum or even the digital collection of the Städelmuseum

Love goes through the stomach:

The perfect start to a romantic Valentine's Day also includes the right breakfast. Of course, you don't have to do without that during the lockdown. We have compiled HERE the most delicious breakfast boxes and other to-go offers for the start of the day.

If you don't want to cook for dinner later in the day, but want to order something, you can find HERE a list of restaurants that offer a delivery or pick-up service in Frankfurt.

Chocolates & Chocolate: You can get sweet Valentine's Day gifts of a special kind in Frankfurt at BITTER & ZART, at NASCHMARKT AM DOM or at LÄDERACH on the Zeil.

Flowers: Where to get especially beautiful flowers in Frankfurt, we tell you HERE.

Arthouse-Kinos Frankfurt Valentine's Day Box: The Arthouse-Kinos Frankfurt, the Cinema and the Harmonie, offer a Valentine's Day Box as a nice gift for all cinema fans in love. Included are - in addition to cinema vouchers for the cinemas worth 20 &euro; - optionally a bottle of red wine from "Greg & Juju" (Syrah) or white wine (Sauvignon), a Zotter chocolate, a pack of original Arthouse-Kinobärchen and a lot of love! Simply beautiful! You can find more info HERE

CiderWorld boxes for cider lovers in love: If you want to please your or your loved one with especially fine sparkling apple wines, then the two exclusive gift boxes for lovers from the CiderWorld shop are just the right gift. Infos and ordering options can be found HERE

You can also find even more suggestions in our #SupportYourLocals post

Finally, we have some really nice streaming tips for the heart! On NETFLIX there are two still quite new series that are perfect for a romantic binge Sunday: First, there's DASH & LILY. This romantic scavenger hunt through New York was a real hit with audiences and critics during the holiday season, and it's also providing plenty of lovely pining moments for Valentine's Day. Also, one of the biggest recent successes for NETFLIX, the series BRIDGERTON, is making a lot of women's hearts beat faster right now.

At Amazon PRIME VIDEO, we can offer all lovers the series MODERN LOVE, but especially the second of the self-contained episodes entitled "When Cupid is a Curious Journalist", to heart. But even with the always heavy on the tearjerkers family series THIS IS US is wonderful to snuggle up to.

Supposedly, Valentine, a priest from Ternia, later canonized as a martyr, was executed on February 14 in 269 AD. The offense of which he was accused: He was said to have performed illegal marriage ceremonies according to the Christian rite. A far more credible explanation is that in the early days of Christianization, it was much easier to win people over to the new faith if they were left with their old pagan celebrations and feast days. Often these were even incorporated into Christian customs.

In the early 4th century in the Roman Empire, Lupercalia, the feast of Juno, wife of the supreme god Jupiter, was celebrated on February 14. Juno was especially revered as the protector of marriage, and on her feast day the giving of flowers is also said to have been common. In addition, couples were said to be drawn to each other as fiancés.

In another variation, a girl was supposed to marry whoever crossed her path first on the morning of February 14 (if that person was unmarried).

Christianity, struggling to establish itself, virtually appropriated pagan customs by attributing them to "Saint St. Valentin" and chose February 14 - the day of his execution - as Valentine's Day.

Even the Kirchenlexikon confirms this variant:

"The custom of giving each other flowers on Valentine's Day goes back a long way: in ancient Rome, the goddess Juno, the protector of marriage and family, was commemorated on February 14. Women were given flowers on this day."

A direct connection of flower-giving to Valentine of Terni, however, could not be uncovered until today.

Since the 15th century, Valentine's couples have been formed in England to send each other small gifts or love poems.

The association with flower gifts may date back to the wife of poet Samuel Pepys, who responded to Pepys' love letter with a bouquet of flowers in 1667. From then on, the association of letter and flowers became a custom in upper English society. English emigrants then brought this custom to the "New World", where it spread in a short time.

But Europe has also developed its own customs around Valentine's Day.

For example, in Italy, lovers usually meet at bridges or bodies of water, while in France, Belgium and England, Valentines are drawn for a year and are then considered engaged.

In Finland, Valentine's Day is celebrated as "Friendship Day", when people send cards or send small gifts - usually anonymously - to those they find sympathetic.

But it only really caught on with the increased advertising by florists and the candy industry. The gifting of bouquets has long been a must for every man. But also the gift trade profits in the meantime from the "Tag of the lovers".

Even on the Internet you can find shops specialized in Valentine's Day, whose spectrum ranges from romantic, useful to kitschy gifts.

In this sense, we wish all lovers a happy Valentine's Day!!!

And for those of you who are (still) single but would also like to celebrate Valentine's Day no later than 2022, we might have HERE in our singles special some helpful tips for after the lockdown!