Christmas customs all over the world II 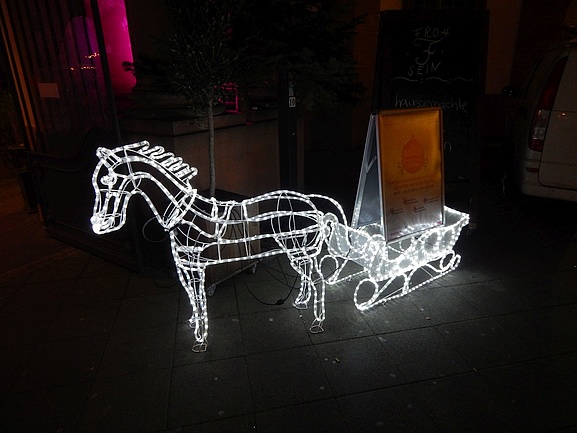 All rooms are decorated with mistletoes, holly, laurel and garlands. The feast, of course Plumpudding and "Gregor", the typical British Turkey comes on the table, stretches over hours.

The children have to wait until the next morning for the presents. On Christmas Eve, they hang up their stockings. When everything is asleep, Santa Claus steps through the chimney into the house and fills the children's stockings with presents.

On January 6th "Mari Lwyd" rings the doorbell and poses a puzzle. Whoever does not know the answer will be bitten by it(!) and must feed the white-coated figure.

Santa Claus, the American Santa Claus, comes in the early morning hours by the fireplace and brings the gifts.

A Christmas highlight is the impressive Christmas tree in front of the Rockefeller Centers in New York.

First installed in 1931, it offers an impressive sight year after year with its 30,000 lights and unusual decorations.

The gigantic Xmas parades that take place everywhere are unique.

In the south of the USA one celebrates with extra loud fireworks to drive away the evil spirits by the noise.

In both countries in the southern hemisphere, Christmas falls in the middle of summer. Australian and New Zealand Christmas customs are similar to those in Great Britain and North America.

In 1938, Melbourne began singing Christmas carols by candlelight on Christmas Eve. This tradition, the Carols by Candlelight, has also found favour in other cities.

On the 25th day of the week, the Carols by Candlelight was held for the first time. December after the sumptuous typical British turkey dinner and plump pudding a barbecue/picnic on the beach will be held

Feliz navidad! That's how you wish Merry Christmas in Mexico. Colourful and noisy processions with a lot of hustle and bustle and fireworks, the so-called "posadas", which recreate the hostel search, determine the Christmas street scene.

A particularly important part of the festival for children is the "Pinata", a clay pot decorated with stars and figures, filled with fruits and sweets.

The pinata is hung up so that the children with blindfolded eyes can try to smash the pot and get the treats.

Christmas cribs are very important in South America, both in the home and in public places.

In areas with a high proportion of indigenous population, such as Peru, the nativity scene figures are carved by hand according to a centuries-old pattern.

As in Mexico, street processions that recreate the events surrounding the birth of Christ are frequent.

The gift is given in Colombia with El Niño Jesus (Christ Child), in Chile with a Viejo Pasquero (old shepherd) and in Brazil with the Papai Noël (Santa Claus), with the latter two Santa Claus being associated in much the same way

The Philippines have the longest Christmas season in the world. Traditionally, the feast is heralded by evening masses over nine days, beginning on 16 December.

The evening of December 24th is the long awaited noche buena, when after the midnight mass in the family circle the Christmas dinner is served. It consists of cheese balls and ham

Christmas is called Julfest in Scandinavia and has a long tradition. It originates from old harvest and midwinter customs in which Jul bread was baked, Jul beer brewed and Jul straw scattered in the Julstube.

The Yule festival ends on 13 January with a hearty feast.

Typically Finnish: the community sauna bath on the 24th and "baked Swede", the festive pork dish.

One of the most important Christmas days in Sweden is 13 December - Saint Lucia's Day. The celebration of light commemorates the longest night of the year.

In the morning of Lucia Day, the eldest daughter of the house goes through the house dressed as a saint and awakens the family. She also distributes Lucia biscuits.

The highlight of the festivities is Christmas Eve. The traditional dishes are served here.

After dinner the family gathers around the Christmas tree and opens the presents brought by Jultomten, the Swedish Santa Claus.

In Denmark on Christmas Eve a rice porridge is eaten in which an almond is hidden. Whoever finds the almond will be lucky the following year.

In Norway, Christmas preparations include cleaning the house and chopping wood, as the fire must not go out during Christmas.

On Christmas Eve the children are given presents by the Julenissen, a mixture of gnomes and Santa Claus