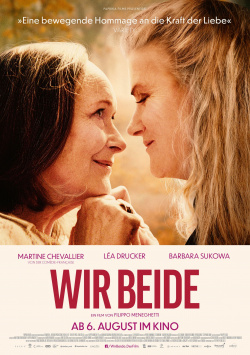 For many years Nina (Barbara Sukowa) and Madeleine (Martine Chevallier) have been living next door to each other and - at least apparently - have a good neighbourly relationship. But the truth is that the two women have been united by a deep love for a long time. A love that Madeleine still has to keep secret from her children even at the age of 70. For her son and daughter she plays the faithful widow who mourns a man whom Madeleine never really loved. Now the two women finally want to spend the rest of their lives together. But then fate thwarts their plans and for Nina a whole new, even more difficult fight for Madeleine's love and a common future begins.

"The two of us" is a very special love story that makes you think, that makes you sad, but at the same time it is also very heartfelt without ever becoming corny. It is sad that two people have met who have found the great love in each other, but who are not allowed to live it out openly due to prejudices or social conventions. The story is not set in a prudish past, but in the France of the present.

The drama is performed by two great leading actresses. Martine Chevallier is convincing as a family mother who has chosen a life full of lies and secrets for fear of disappointing her children. At her side, Barbara Sukowa shines, who also fights for her love in the face of almost insurmountable hurdles - whatever the cost. Embedded in the sensitive production of Filippo Meneghetti, the two deliver a strong and very authentic performance. The love between the two elderly ladies seems so real and their story all the more moving.

Meneghetti is to be credited with the fact that he could not completely avoid smaller cliché traps here and there, but always refrained from using all too striking moments. With subtle tenderness he lets the events unfold up to an end that seems to be unambiguous, yet at the same time somehow remains open. "The Two of Us" is a small, very nice movie, which despite all the drama and sadness is above all a hopeful and life-affirming song of praise for the power of love. And for that there is clearly a: Absolutely worth seeing!