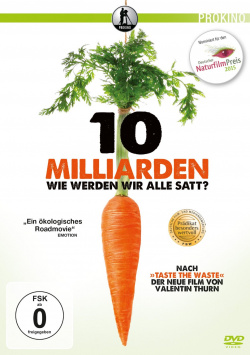 Film: As our planet's natural resources draw to a close, the world's population continues to grow. By 2050 it will have grown to ten billion people. Ten billion people who need one thing above all else: Food! But where will it come from if too many people are already starving? Are genetic engineering and industrial breeding facilities the solution? Is the consumption of insects as a protein source a sensible alternative? Or will everyone have to grow their own food in the future? In his latest documentary "10 billion - How do we all get fed?" bestselling author and filmmaker Valentin Thurn ("Taste the Waste") gets to the bottom of these questions. He questions the fundamentals of food production, investigates the exploitation of scarce resources and at the same time looks for helpful and meaningful solutions. The result is shocking, but also shows that it is not too late to change something.

The film does not admonish and spare the viewer many very unpleasant pictures, especially concerning the mass animal husbandry. And yet Thurn does not pursue a one-sided accusation with a raised index finger, but tries to shed objective light on all facets of the subject. And it is precisely because he is very restrained in his assessment of what is shown that the pictures appear all the more intense. The movie manages to shake you up and at least for a short time trigger a rethinking or even a rethinking of the viewer. But that is not enough, because for something to really change, most people's attitude to food would have to change fundamentally. Yet - and the film also makes this very clear - every step away from established behaviours, no matter how small, is an important step in the right direction.

Naturally, this message clearly stands in the foreground of the film. But apart from that, it is simply extremely interesting to see how agriculture, research, technology, and even the most ordinary people face the problem of the impending food shortage. This is particularly appealing, for example, in the juxtaposition of more original cultivation methods for vegetables and industrial breeding roads, intensive animal husbandry and artificial breeding of meat with the aid of stem cells, or international speculation on food prices and a concept in which smaller municipalities try to decouple themselves from the big financial economy. For each example there is a counter-project, which doesn't necessarily have to be better, but which shows that the situation is never without alternative.

"10 billion - How do we all get fed?" is a very good documentation from a technical point of view and an extremely important film in terms of content. Valentin Thurn tries not to deal too emotionally with this extremely important topic, which still too many people turn a blind eye to, but to put the facts on the table in a factual way. Which conclusions and consequences one draws from it is left to each spectator. However, one thing should be clear to everyone at the end of the film: it can't and shouldn't go on like it has been until now, so that in a few decades not only the privileged but all people will be fed up, without our anyway very fragile ecosystem finally collapsing. Sure, the movie is a little bit uncomfortable, but that's exactly why it deserves one: Absolutely worth seeing!

image + sound: Since only one stream was available for the test, no information about the final image and sound quality can be given here.

Extras: The 35-minute bonus material on the DVD consists of a few shots of the shooting (approx. 2:25 min.), additional scenes (approx. 9 min.), the trailer and an interesting interview with director Valentin Thurn (approx. 23 min.). Worth seeing!

Fazit: The documentary "10 Milliarden - Wie werden wir alle satt?" (10 billion - How do we all get enough?), which was awarded the German Nature Film Prize, manages to deal with an emotionally stirring topic in a pleasantly matter-of-fact way, so that the viewer is not forced to give a certain opinion. Despite all restraint, the movie makes it quite clear that something has to change in our way of thinking and acting. Because the great tasks facing us as a result of the constantly increasing population figures can certainly be mastered - but not if we continue as before. An important and worth seeing movie, which has a very interesting interview with the director and some additional scenes to offer on DVD. Recommended