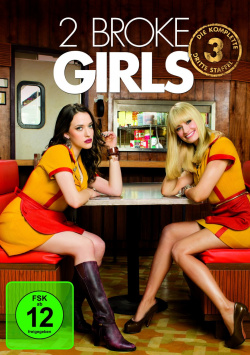 Film: Finally it's time: Max and Caroline open their new Cupcake store in the next room to Williamsburg Diner. Stupid thing is her first customer dies right in front of her shop window. But when it turns out that the dead man is a famous rock star and suddenly numerous fans make the pilgrimage to the Cupcake shop, the luck with the two girls finally seems to be on the right track. But success does not last long. At first Han (Matthew Moy) suddenly demands rent for the once dilapidated room in his diner, then Caroline's attempt to raise money for extremely expensive new pants creates tension between his girlfriends as well as the appearance of a stray cat to whom Max immediately loses her heart. The success of their cupcake shop is also threatened by the hype surrounding the so-called "cronut" - a mixture of croissant and donate - which the girls are determined to counter with a similarly successful creation. Hans Mutter's visit is also a source of excitement, as she is convinced that her son has finally found a wife. Too bad that the lady whose photos Han sent his mom is a stripper who has to convince Max and Caroline to play Hans' girlfriend for one day. So it remains turbulent in the life of the "2 Broke Girls". Big changes are coming for Max. She decides to complete an apprenticeship in a renowned confectionery school. Not only could it change your career. Because when she gets to know the class clown Deke (Eric Andre) in her course, her private life gets a lot of movement...

The makers of the successful sitcom "2 Broke Girls" tried to bring a little change to the series in the third season. The two ladies get a new shop, Max starts their training and Caroline starts a new side job, there is a new colleague in the diner and of course a very unusual romance for Max. In principle, such innovations are sufficient to bring a breath of fresh air to a series. However, the scripts stick too much to the proven formula to make the changes really noticeable for the viewer. So almost every statement is still used as an occasion for a slippery ambiguity and there is no episode that does not allude to the fact that Han is very small and Max's breasts are quite big. And in the long run the monotony in the jokes and word games just seems a little tiring.

Nevertheless the series still works very well (at least for fans) in the third year. This is primarily due to the good-humoured ensemble, whose joy of playing is simply infectious. Whether it's the wonderfully dry-sarcastic nature of Kat Dennings or the fact that Beth Behrs isn't too bad for silly slapstick either, the two main actresses and their co-stars make sure again and again that the series is forgiven for its many deeper jokes. Apart from the actors, it's also the fact that the series has always remained true to itself and never pretended to be more than a series of easily digestible roughities, which gives the "2 Broke Girls" a certain charm.

In the innovations Eric Andre, who already made a positive impression in the short-lived sitcom "Apartment 23", works especially well. His sparkling word fights with Max are sometimes really funny and you just have to see his unusual dwelling. Here the makers have really come up with something original. Not quite as convincing on the other hand is the new colleague Luis, played by Federico Dordei, who is a bit too clichéd and seems like an endeavoured counterpart to Oleg (Jonathan Kite). While one would have liked to see more of Deke also in the future, the retirement of Luis after this season is not a really big loss.

Who doesn't expect more from the series than was offered in the first two seasons, will get here again much to laugh about. But if you were hoping for a real development of style, story and characters, you might get a bit tired here. For fans, however, there is one thing that is clear: Worth seeing!

Picture + sound: The new episodes also shine on the DVD in a quality that can be expected from a contemporary comedy series. The picture is very clean and has a convincing overall sharpness. The warm, very harmonious colours also leave a very positive impression. The Dolby Digital 2.0 mix is mainly limited to the playback of dialogues, music and laughs, which is somewhat central, but overall well implemented and completely satisfactory. Good!

Extras: As a bonus the squadron box on the third DVD has some unused scenes from different episodes (ca. 18:01 min.), as well as some amusing messed up scenes (ca. 7:28 min.) to offer. For fans it's definitely worth seeing!

Fazit: "2 Broke Girls" offers in its third year despite some new characters and dramaturgical changes the fans in principle exactly what made the series so successful in the first two years. Slippery ambiguities dominate the dialogues, which slowly shows a few signs of wear and tear. The good interplay of the ensemble, especially the two leading actresses Kat Dennings and Beth Behrs, makes the new episodes worth seeing despite some weaknesses. The DVD presents the series in good picture and sound quality and the bonus material consisting of cut and messed up scenes is very amusing for lovers of the series. There is a good one for that: Recommended!