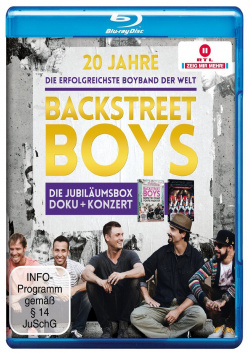 Content: It's hard to believe it, but it's been over twenty years since the Backstreet Boys first appeared on the scene, triggering the peak of the 90s boyband boom. With over 130 million records sold, they are the world's most successful boy band of that era, ahead of Take That and New Kids on the Block. And even though the band hasn't been heard from for some time, they are still active in the music business after two decades. So from 2010 they went on a big tour together with the former competitors of NKOTB and released a new album in 2013, which they presented live again with the original line-up. To celebrate the 20th anniversary the documentary "Show ´em what you´re made of" was filmed during the creation of the album and a concert of the "In a World Like This" tour was recorded. Both are now available on DVD and Blu-ray.

The documentary not only shows how Nick, Brian, Kevin, James and Howard work on their album, but also takes the fans on a journey back in time to the beginnings of the band. Many archive footage shows how they got through schools and shopping centres before the big breakthrough. In addition, each band member leads his colleagues to a place from his past, then tells them about his family and the time before the Backstreet Boys. This sometimes seems a bit thick and too staged. But for fans it's just nice to learn so much about the guys and to see not only their professional but also their very private side.

It is very pleasant that just the beginning time is not glorified as pure fun. There is a lot of open talk here about difficult times and not at all glamorous moments, which frees the young gentlemen a little from the clean man image that boygroups generally have. As a fan you get a really interesting and entertaining documentary with a high nostalgia factor and a little surprise factor. That alone makes the purchase of this disc already recommendable. But there is also the concert that was recorded in Saitama, Japan. The Backstreet Boys present 23 of their hits and bring the sold out hall to the boil.

To be honest, the show isn't really great. The dance choreographies - which is probably also due to the age of the boys - are no longer quite as spectacular as they were twenty years ago. And also the stage design or the lightshow are relatively reduced. What this concert lives on is the great atmosphere, which is created by the enthusiasm of the fans and of course by the high sing-along factor of the many catchy tunes of the band. And you notice that some of the songs you might have blasphemed about twenty years ago are really timeless good pop songs. Of course, there is only one conclusion to all this: For fans, this combination of documentary and concert is an absolute must!!

Picture + sound: A lot of archive material is used in the documentation, partly recorded with old camcorders. Here the quality is of course very poor. But with the current video and interview sequences the picture pleases with a good sharpness of detail and harmonious colours. In the case of the concert recording, these positive aspects are even more pronounced. The sound of the documentary is a bit more reserved overall. Only with excerpts from the music videos or from live performances does the whole thing appear pleasantly lively. The concert is a pleasure with a good DTS-HD Master Audio 5.1 mix, which transports a little live feeling into the living room. Good.

Extras: For the documentation there is additional material, consisting of some outtakes (about 4:57 min.) and six additional scenes (about 18:25 min.). For fans there are some nice moments with it, because here even more, partly very intimate insights into the past of the individual band members are offered.

Fazit: "20 years Backstreet Boys" is an absolute must for fans. The documentary does not only show many rare archive recordings, but also lets the audience follow the creation of the last album. And the concert recording shows impressively that the Backstreet Boys still make their audience scream - even if the show isn't really spectacular. The Blu-ray presents documentaries and concerts in good picture and sound quality and also offers more than twenty minutes of bonus material on the documentary film. Altogether there is a clear one for it: Recommendable!