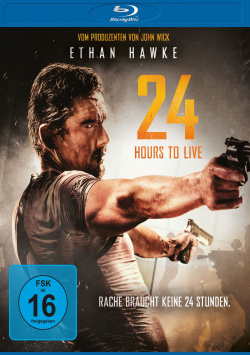 Film: Travis Conrad (Ethan Hawke) was once a highly decorated elite soldier, one of the best mercenaries of his unit. But after the tragic loss of his family, Travis is a broken man who has given up his job and lost all zest for life. But his old buddy Jim (Paul Anderson) succeeds in recruiting Travis for one last, extremely lucrative job: He's supposed to take out a target who could be dangerous to some powerful people. But before he succeeds, he is unmasked and shot by Interpol agent Lin Bisset (Qing Xu). Thanks to an experimental procedure by the private military company Red Mountain, Travis is brought back to life again for 24 hours - but only to give Jim the location of the target. Travis feels betrayed and flees - with only one goal in mind: to use his last hours to destroy Red Mountain…

Stunt specialist Brian Smrz, who has been on blockbusters like "Iron Man 3", "X-Men: Future is past" or "Terminator: Genisys" as Second Unit director, presents his second own directing work with "24 Hours to Live". No question: Smrz can stage good action even with a small budget. This gives this thriller a pleasantly high entertainment value. However, shoot-outs and car chases can't completely hide the fact that the script isn't exactly one of the best moments in Hollywood writing.

The idea, even if it is not completely new, is quite exciting and also offers a lot of potential, which is minimized by numerous clichés and logic holes. The actors are solid, but they don't deliver any masterpieces either. Yet, it's Ethan Hawke in particular who does his thing as a dying (or actually already dead) action hero well, even in a downed actor mode. And also cult star Rutger Hauer ("Blade Runner") and Qing Xu ("Looper") do their thing well enough, despite the rather flat dialogues, to make you forget some of the weaknesses of the script.

In the 80s, "24 Hours to Live" would have been described as a typical video store item that could have been found somewhere between the latest films by Steven Segal and Jean-Claude Van Damme. If you like simply knitted B-movie action, which is dramaturgically weak, but staged in an absolutely solid way, then you can confidently access it here. An entertaining home cinema evening is then also guaranteed. Worth seeing!

Picture + sound: The Blu-ray image is characterized by a high image sharpness, which also allows many smaller details to come into their own. The colour scheme is somewhat artificial, but corresponds exactly to the atmosphere of the thriller. The sound shows its strengths right in the opening sequence. In addition to the well mixed dialogues, sound effects such as shots, explosions or squeaky car tires repeatedly provide powerful movement in the surround range. Good.

Extras: Bonus material does not have the Blu-ray unfortunately to offer.

Fazit: "24 Hours to Live" is a solid action thriller, which can't quite play in the upper league of the genre, but which can entertain well despite all clichés and logic holes. The Blu-ray presents the rapidly staged thriller in good picture and sound quality. Only bonus material is unfortunately not available. All in all a very clear one: Recommended!