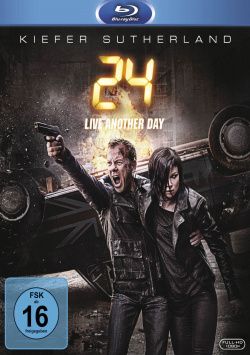 Film: Jack Bauer (Kiefer Sutherland) is as if swallowed off the face of the earth. Although internationally wanted, the former CTU agent has been like a phantom for four years. As soon as he's spotted anywhere, he's gone again. But now Bauer appears in London during a state visit by US President Heller (William Devane). The CIA agent Kate Morgan (Yvonne Strahovski), who has fallen out of favour with the CIA, doesn't seem to be at ease that Bauer suddenly makes mistakes and lets himself be taken into custody just like that. And indeed Bauer's arrest proves to be a skilful move in the liberation action of his former CTU colleague Chloe O'Brien (Mary Lynn Rajskub). With their help, Bauer wants to prevent an attack on President Heller. Because a device has fallen into the wrong hands with which control of heavily armed US drones can be taken over. And it's the drone that's supposed to kill Heller. But this is only the tip of the ice of a widely ramified network of terrorism, conspiracies and betrayal. And even a Jack Bauer sees himself at some point at the end of his possibilities - and he sees himself forced to make a drastic decision...

With "24: Live Another Day" Kiefer Sutherland returns four years after the end of the cult series "24" to the role that made him an international superstar from 2001 to 2010. After all attempts to bring Jack Bauer to the big screen had failed, a comeback in the form of a mini-series was announced in 2014. Jack Bauer's story should be told here to the end (of course with a small back door for a possible continuation), whereby the makers wanted to pull out all the stops again. The film was shot mainly on location in London, where after a few minutes in the first episode the tension can unfold again that made "24" so successful. With Yvonne Strahovski ("Chuck") as agent Kate Morgan, Bauer has been assigned a strong comrade-in-arms who would have the potential to continue the series (or a spin-off) on her own. Moreover, the decision to shorten this comeback season to 12 episodes should prevent the story from getting too entangled in subplots, which then unnecessarily slow down the actual tension.

So the first episodes are far better than the somewhat disappointing last regular seasons of the series. It's true that the screenwriters don't give up the usual plot elements and clichés this time either. But the very dense tension, first class action and the very interesting character of Margot Al-Harazi, played by Michelle "Game of Thrones" Fairley, easily iron out such weaknesses. For fans it is clear: Jack Bauer is back - and that's as good as ever!

Leider this quality can't be maintained to the end. The latest episodes fall back into the very pattern that has robbed the series of so much of its former strength in recent years. An old opponent of Bauer's suddenly appears with a strained turn of events, steering the previously so exciting story in a completely new direction, only to offer Bauer the opportunity for the most dramatic farewell possible. That's a pity, because this short season is actually strong enough not to need such a stunt.

However, even if the perhaps final farewell of Jack Bauer is made a little easier so unintentionally, "24: Live Another Day" is very exciting, grippingly staged and in some moments spectacularly implemented TV action with good actors, which is absolutely worth seeing especially for fans of the first hour!

Picture + sound: Technically there is no reason to complain about the implementation of the new episodes for the Blu-ray. The picture is absolutely clean, the sharpness of detail is on a high level and the colours are very powerful. For a TV series, that's really excellent. The sound is a pleasantly dynamic DTS-HD 5.1 mix, which always offers really good, powerful surround effects, but at the same time transports the dialogues out of the speakers in a way that is easy to understand. But there's a very clear one: Very good!

Extras: Compared to previous season boxes, the bonus material of this revival is rather modest. It starts with the short film "Solitary" (approx. 7:26 min.), which shows what has become of one of the most popular characters in the "24" universe. In itself, the short film makes little sense, but if the series continues one day without Jack Bauer, this would be the perfect introduction. A short look at the creation of "24: Live Another Day" is offered by the featurette "Worlds collide" (ca. 6:43 min.). Further mini documentaries about the shooting in London (approx. 3:22 min.) and about the environmentally friendly shooting (approx. 5:16 min.) will follow. Finally the set has some missing and extended scenes from the single episodes (ca. 13:19 min.) on board. Somewhat lean, but well worth seeing for fans!

Fazit:"24: Live Another Day" recalls impressively, especially in the first episodes, why the real-time thriller has advanced to the absolute Klut series. The return of Jack Bauer offers pure excitement and explosive entertainment. But also the weaknesses, from which just the last squadrons suffered, come out more and more towards the end. This won't spoil this comeback for the fans of the series, but the outstanding quality of the first seasons can't be continued by the alleged swan song of Jack Bauer. The Blu-ray presents the 12 episodes in very good picture and sound quality. The bonus material is a bit meager, but worth seeing for fans. Altogether there is a clear one: Absolutely recommendable!