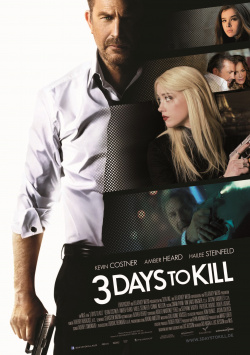 Ethan Renner (Kevin Costner) was one of the top agents of the CIA for many years. But for this job, Ethan had to make great sacrifices. He did not have time for a normal family life. And since he didn't want his wife Christine (Connie Nielsen) or his daughter Zooey (Hailee Steinfeld) to be exposed to the dangers that his work brought with it, he had to make the difficult decision to leave them. That was some years ago and the contact to Zooey is almost completely broken off. But then Ethan learns that he is seriously ill and hasn't got long to live. He wants to use the little time he has left to make up for the mistakes of his past and to rebuild his relationship with his daughter. Stupid thing is, the CIA won't give up his services. Young agent Vivi Delay (Amber Heard) is on his heels to get him to help her eliminate one of the most dangerous terrorists in the world. In return, he would get a previously untested drug that would allow him even more time with his family. But caring about a pubescent girl and a terrorist at the same time is an almost unsolvable task even for a professional like Ethan…

that Luc Besson is in "3 Days to Kill". had his fingers in the game, the new directorial work by McG ("3 Angels for Charlie") is very clearly noticeable, since the parallels to the "Taken" films also written and produced by Besson are very obvious. But while the Liam Neeson action hits are more serious and gloomy, McG takes a more relaxed approach. Although there are also some more dramatic moments in his work, the humor never gets a raw deal. This works out really well in some scenes and makes sure that the movie is a lot of fun despite its somewhat uninspired script. However, there are also moments in which the humor seems to be very trying and just doesn't want to ignite. However, the relationship is quite balanced, which is why the less well done moments only marginally diminish the enjoyment of the movie.

The action is implemented quite well. Although there is not much new to see here, Kevin Costner fights his way through the streets of Paris and is quite a sight to behold. Also the entrance sequence in a hotel in Belgrade has a very high entertainment value. Especially because McG always loosens up the whole thing with a bit of humor, those moments that would otherwise have seemed rather unintentionally funny due to a somewhat clichéd character also work. Anyway, Kevin Costner cuts a really good figure with his somewhat self-ironic spiced performance - and even on a girl's bike.

Although her character is very exaggerated, Amber Heard as an ice-cold and sexy agent is not only visually convincing. Hailee Steinfeld and Connie Nielsen, on the other hand, have some problems to play against the very one-dimensional and clichéd drawing of their characters. Since the script offers the characters little room for development anyway, this cannot be interpreted negatively. But "3 Days to Kill" also doesn't want to be a big acting movie, but an entertainment movie, that wants to offer its viewers good action, a little bit of excitement and a lot of fun. And McG managed to do that well in the end.

Admittedly, there are some unnecessary lengths and the dialogues are not exactly award-worthy. But if you can overlook that and don't expect much more than a more humorous "Taken" copy, you will get a convincing Kevin Costner and very solid popcorn entertainment - no more, but also no less. Worth seeing