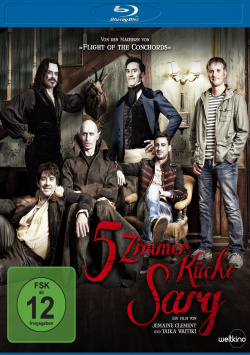 Film: If four very different men live together in a shared flat, then the chaos is already pre-programmed. But if the flatmates are four vampires from different epochs, then normality is actually out of the question. All the more astonishing are the shots of a film team that has been granted access to the vampire flats of Viago (Taika Waititi), Vladislav (Jemaine Clement), Deacon (Jonathan Brugh) and Petyr (Ben Fransham). In the absolutely authentic documentary "5 Zimmer Küche Sarg" the filmmakers expose that even vampires have to struggle with the normal everyday problems of living in a shared flat: who does the dishes, who takes care of the food and which outfit suits the next party night - a very special problem if you don't have a mirror image. But despite a lot of friction the "living" together of the four bloodsuckers works - until Petyr turns the young Nick (Cori Gonzales-Macuer) into a vampire. At first, the experienced vampires hope to learn about the modern world through their mid-twenties, while teaching him the ancient basic rules of eternal life. But that just doesn't really work out. When Nick brings along his friend Stu (Stu Rutherford), the WG-life gets finally out of joint...

The format of the so-called "Mockumentary", a faked documentation, is really not new anymore. At the latest since the international success of the comedy series "The Office" and its numerous variants like the German version "Stromberg" many series, but occasionally also films make use of this stylistic device. And as with the not entirely unlike "found footage" genre, excessive use has meant that the effect achieved at the beginning has worn off somewhat. Nonetheless, Taika Waititi and Jemaine Clement with their vampire-mockumentary "5 Room Kitchen Sarg" have managed to defy any signs of wear and tear of the subject and to stage a wonderfully original and extremely funny comedy.

The comedic effect is not only achieved by playing with the usual stylistic means of the Mockumentary, but primarily by the fact that countless vampire clichés are transmitted here with the quite normal life in a modern metropolis. Sure, not every gag hits the mark. But even in its weaker moments, the production radiates an incredible amount of wit and charm. You can see not only in the play of the actors that the people involved obviously had a lot of fun writing and implementing the weird story.

When the vampires clash with a werewolf gang, desperately try to be invited to clubs or two potential victims prepare a truly delicious dinner, when Viago skypt for the first time or Vladislav shows the audience his torture chamber, then really no eye remains dry. As a horror comedy, "5 Zimmer Küche Sarg" is a real direct hit, which also makes the target audience happy because of its many genre allusions. Those who hope for a hearty horror food will be bitterly disappointed. And even those who can't get anything out of humor of the weirder kind won't be able to recognize the genius of this film.

On the other hand, those who can get involved with the very special humor of the makers, who have already lived out their very own style in the comedy series "Flight oft he Conchords", which has long since become a cult in fan circles, will definitely experience one of the funniest films of the year here and will want to move into this flat immediately. And that's why the bottom line is very clear: Absolutely worth seeing!

Picture + sound: Picture and sound are available on the Blu-ray in convincing "Mockumentary" quality. The picture is very clean, the overall sharpness is good and the colouring is very atmospheric. The fact that there are some slight blurring in the depiction of smaller details doesn't have a negative impact and is absolutely suitable for the style of the movie. The sound available in DTS-HD Master Audio 5.1 and stereo makes the amusing dialogues sound powerful from the speakers, but otherwise has only a few noteworthy surround moments to offer. All in all, the English language version seems a bit more harmonious than the German soundtrack, where the dialogues sound a bit more central from the speakers. Altogether there is a deserved one for the technical implementation measured by the genre: Gut!

Extras: The Blu-ray has almost two hours of bonus material to offer. We start with a whole series of bonus videos. The most interesting is probably the original short film from 2005 (approx. 27:24 min.), on which the film is based. Many scenes from the feature film version can be seen here in a similar form, whereby the whole look and the effects look much cheaper. The whole thing is amusing and charming. We continue with a nice look behind the scenes (ca. 18:17 min.), where we take a look at the shooting without the usual promo character. Stu then gets an office homestory (about 3:34 min.), Jackie is introduced in more detail (about 5:14 min.), we are offered Deacon's erotic dance in full length (about 3:32 min.), we hear Viago singing (about 3:32 min.), we hear Viago singing (about 3:34 min.). 2:41 min.), experience Vlad as a painter (approx. 1:43 min.) and poet (approx. 1:11 min.), can enjoy a dance of vampires and werewolves (approx. 1:04 min.) and listen to a call at the night dentist (approx. 4:07 min.). Finally, the vampires visit a film festival in Transylvania (approx. 4:11 min.) and then roam through Berlin (approx. 3:33 min.).

Fazit: Anyone who manages to get involved with the weird humor of the vampire documentary "5 Room Kitchen Coffin" will be offered a firework of original ideas, a charming game with vampire clichés and lots of wonderful jokes. On the Blu-ray this comedy presents itself in very good picture and sound quality and also has a lot of worth seeing extras on board. But there is a more than deserved one: Absolutely recommendable!