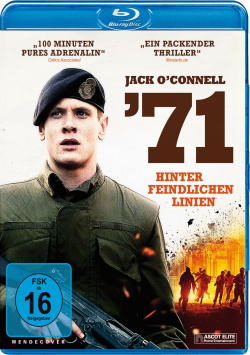 Contents: The young English soldier Gary (Jack O`Connell) doesn't know what to expect when he is ordered with his unit to Northern Ireland to support the local police there. Gary is aware of the clashes between the IRA and the British army, but has no idea what hateful climate he will encounter among the ordinary population. But this becomes clear to him right from his first mission, which should have been pure routine, but which ends with one of Gary's chamberades being shot and Gary being left behind by his unit in the turmoil of a street fight. Now Gary has to flee through the narrow streets of Belfast from an angry mob who knows only one goal: his death! Just when he thinks he can make it back to his unit, he is seriously injured in a bomb attack. His last hope now is a Catholic family that gives him shelter. But he is not safe in the gloomy housing estate, because the IRA has long been on his heels...

With "`71 - Hinter feindlichen Linien" director Yann Demage has staged an extremely exciting thriller that uses the bloody Northern Ireland conflict to create an almost claustrophobic atmosphere in the streets of Belfast. The film is not about illuminating the background of the conflict or clearly taking sides. Rather, Demage wants to depict the situation in Northern Ireland at the beginning of the 1970s and show how quickly the mood charged with hatred and prejudice could escalate into violence and death. Although Gary as a British soldier is very clearly on one of the enemy sides, he is a good identification figure for the viewer because of his still youthful inexperience.

When he has to flee through the streets of Belfast, injured and abandoned by his unit, and is always hostile or even attacked, then you feverishly follow him, because the fate of Gary really interests you. Until the finale the director hardly allows his audience a breather, whereby he always tries to offer enough quiet moments in which the characters can unfold well. In this way he prevents the usual black-and-white painting of good and evil, the boundaries of which are in any case repeatedly blurred. In the end there can be no winner, because in bloody conflicts like the Northern Ireland conflict there are generally only losers.

The end is then also very depressing and offers before a certain relief first of all a strong blow into the stomach pit of the spectators. The finale is of enormous intensity, which makes you think about this film for a long time and is also interested in learning more about the real backgrounds of this fictional story. All this, paired with the good actors and a very good camera work, makes "`71 - Hinter feindlichen Linien" a moving drama, a nerve-racking thriller and a disturbing look at a conflict that may have come to rest, but is still not completely extinct today. Absolutely worth seeing!

Picture + sound: First of all: if you speak English, you should definitely choose the English soundtrack, as the film looks much more authentic here than in the German dubbing. However, it is also mixed very well and atmospherically and can be heard quite well. The picture pleases with its harmonious 70s look, the dominating brown tones and the high sharpness of detail. There are no really obvious weaknesses in the audiovisual implementation. Good!

Extras: As a bonus the Blu-ray has besides the trailer some quite interesting interviews with the actors and the director (about 35 min.), as well as uncommented B-Roll recordings from the shooting (without subtitles) to offer. Not really stunning, but for interested viewers the interviews are well worth seeing!

Result: "`71 - Hinter feindlichen Linien" is a gripping thriller, set in the bloody turmoil of the Northern Ireland conflict. With the fate of a British soldier fleeing the IRA through Belfast, director Yann Demage makes the constant threat, senseless violence and paranoia that this conflict has brought to Northern Ireland very tangible. An extremely exciting and well played film, which presents itself on the Blu-ray in good picture and sound quality. The bonus material is rather meager, but the look behind the scenes and the interviews at least provide some interesting information. absolutely recommendable]