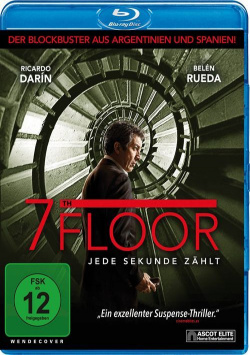 Film: Freshly divorced lawyer Sebastián (Ricardo Darín) tries his best to reconcile his time-consuming job in the metropolis of Buenos Aires with his father's duties. And so it is extremely important for him to bring his two children Luca and Luna to school regularly, even if an important client is waiting for him. For Sebastián and the children, it has become a small ritual that he takes the old elevator, while the siblings from the 7th floor race down the stairs to the ground floor. When Sebastián gets out of the elevator one morning as the winner of this little game and he hears no sounds from the stairwell, he believes that his children want to play a trick on him. But the longer he waits on the ground floor, the more certain he is that something is wrong here. And so he searches the entire apartment building for Luca and Luna, always accompanied by a terrible premonition, which soon becomes a terrible certainty...

Patxi Amezcua's second feature film "7th Floor - Every second counts" is an atmospheric thriller, which can build up an enormously high level of suspense especially in the first half due to its good initial idea. The atmospheric camera work, the convincing play by Ricardo Darín ("In Her Eyes") and the dense staging let us expect best thriller entertainment. Since there are soon many possible perpetrators - from a strange tenant to an older policeman to the opponents of Sebastián's explosive clients - the story quickly develops into a gripping "Whodunit", in which guessing is simply a lot of fun.

However, there are already the first small weak points here. Especially the play of the otherwise so reliable Belén Rueda ("The Orphanage", "The Sea in Me") as Sebastián's ex-wife Delia seems powerless and her facial expression strangely mask-like. Especially in comparison to Darín, the popular and award-winning Spanish actress simply can't convince here. But up to a certain point her weak performance is well absorbed by her comrades-in-arms and the suspenseful staging. But towards the end this is no longer possible either. The resolution is really good, because although it is predictable at a certain point, it's not necessarily what you expected at the beginning. Unfortunately, Amezcuas doesn't take the time to carefully work out this last twist in the story. The last minutes somehow seem too rushed, which doesn't fit into the rather detailed structure of the story framework.

Much of the tension that could be established bit by bit is more or less lost in emptiness. That doesn't make "7th Floor" a bad movie. However, the small weaknesses at the end just leave a somewhat disappointing aftertaste despite the well done finale. Nevertheless, it's quite clear: if you can't logically question every little thing, overlook some small weaknesses in the acting and the staging and have a weakness for exciting mystery thrillers, you should definitely join Sebastián in his search for his children. Not a masterpiece, but entertaining entertainment and therefore also: worth seeing!

image + sound: The image of the Blu-ray has a good to very good detail sharpness, which is supported by a very harmonious color scheme, especially in outdoor shots. Black values and contrasts are also well balanced, which ultimately leads to a very positive overall impression. The sound is available in a good DTS-HD Master Audio 5.1 mix, which has a lot of successful surround moments to offer in addition to the well mixed dialogues. Good!

Fazit: "7th Floor - Every second counts" has a very interesting premise, which ensures a very high voltage level especially in the first hour. The resolution is good, but seems a little rushed. A decent and atmospheric thriller, in which only the otherwise so reliable Belén Rueda disappoints with a rather colorless performance. The Blu-ray is technically well realized and the bonus material offers with a good making of still a worth seeing look behind the scenes. For lovers of European Mystery-Thrillers we recommend this!