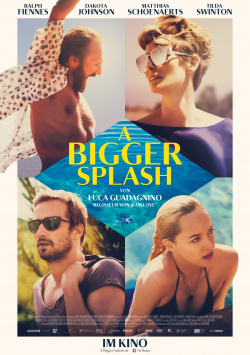 Since she has to spare her voice, the famous singer Marianne (Tilda Swinton) and her boyfriend Paul (Matthias Schoenaerts) retreat to the island of Pantelleria for some time. Here in the sunny south of Italy, the two of them enjoy the seclusion and their love without many words. It almost seems as if they have found a little piece of paradise on earth. But appearances are deceptive. This becomes clear when they unexpectedly receive a visit from Marianne's old love Harry (Ralph Fiennes) and his daughter Penelope (Dakota Johnson). Harry's loud, extravagant manner and Penelope's lascivious innocence are a lasting disturbance to the couple's harmonious get-together. More and more the romantic idyll has to give way to a dangerous maelstrom of jealousy and passions - with fatal consequences…

For the thriller drama "A Bigger Splash" director Luca Guadagnino has collaborated again with leading actress Tilda Swinton after "I am Love". He has perfectly tailored the role of the successful singer, who enjoys her life to the fullest, to her. The film, which is a new interpretation of the French crime classic "The Swimming Pool" from 1969, thrives on its hypnotic images and strong actors. Although Swinton is at the centre of attention both dramaturgically and stage-managed, Ralph Fiennes clearly leaves the most lasting impression. As a louder, more intrusive and somehow unpleasant, yet charming contemporary, Fiennes is in top form. The fact that his game is a bit strenuous in the long run is quite deliberate, as this gruelling behaviour makes a decisive contribution to the fact that events simply have to escalate at some point.

Dakota Johnson can also be completely convincing here. It's true that it's only possible to see it in a few moments without textiles, like in "Fifty Shades of Grey", but in these short scenes it's much more erotic and at the same time more profound than in the successful SM romance. This is simply because she embodies a much more interesting young woman who uses her charms extremely manipulatively and effectively. As a counterpart to Marianne, who is much more experienced and condemned to silence, Penelope, who flirts with her youth, is perfectly cast with Dakota Johnson. Matthias Schoenaerts completes the ensemble with almost stoic calmness, but under which it boils enormously, also more than convincing.

> As harmonious as the atmosphere of the production may be and as convincing as the actors may be, it must also be said that the production likes to indulge in beautiful pictures and long shots and therefore often appears to be very worn, not to say tough. It wouldn't have taken 125 minutes to tell the story. The tensions between the protagonists are quickly established and it is clear after a few moments that Marianne's ex-lover's visit cannot end well. Guadagnino's calm narrative tempo from beginning to end may be consistent, but it also makes the film unnecessarily exhausting. Because at times the scenes are just too tenacious and for the plot relatively insignificant, so that the viewer is doomed to fight the resulting boredom with all his might.

For whom good actors, beautiful pictures and a pinch of eroticism are enough, "A Bigger Splash" can be recommended. But if you expect a thriller that is gripping throughout, the wonderfully extravagant play of Ralph Fiennes and the beguiling looks of Dakota Johnson won't be able to help you get over the lengthy staging. An atmospheric, but unfortunately also very bulky movie and therefore only: with restrictions worth seeing!