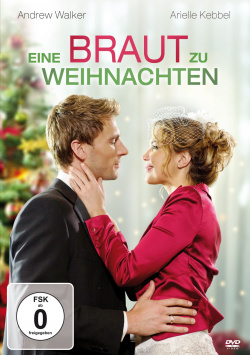 A Bride for Christmas - DVD

Content: All good things come in threes! At least this is what interior designer Jessie (Arielle Kebbel) hopes when she tries for the third time to stand in front of the altar. During the first two attempts she got cold feet, but now everything should be different. Too early, because just before the yes-word Jessie becomes a bride again, who doesn't dare. That's enough for her. She's tired of relationships and prefers to concentrate on her work. But then she meets the attractive permanent single Aiden (Andrew Walker), who obviously tries to win Jessies heart. And the more Aiden lets his charm play, the more difficult it becomes for her to maintain her hypothermic facade. What she doesn't know: Aiden has bet with his buddy Matt (Peter Benson) that he will manage to get a woman to accept a marriage proposal from him by Christmas. Jessie must never learn anything about this, because Aiden of course actually begins to develop feelings for her...

"A Bride at Christmas" is a lively TV production that uninhibitedly recycles set pieces from romantic comedies like "One Like None" or "The Bride Who Doesn't Dare" without bringing real ideas of its own. Innovative entertainment or real surprises should therefore not be expected. Anyone who has seen even one romantic comedy in his life will know exactly where the journey is going after ten minutes at the latest. The game by Arielle Kebbel ("90201", "Gilmore Girls") and Andrew Walker is very charming, but can't really leave a lasting impression. Only Kimberly Sustad as Jessies lesbian sister Vivian can show a bit more than the average actor.

This may all sound very negative now, but in the end it's no big deal. Because the film offers - no matter whether at Christmas time or also afterwards - nice and entertaining entertainment. No more, but no less. Director Gary Yates ("High Life") knows how to follow the rules of the genre and to offer the target audience exactly what they can expect from such a TV movie. A bit of humor, some real power moments and a bit of drama, which culminates in great romance at the end, that's the solid framework on which "A Bride for Christmas" is built. That's not particularly exciting, but it's enough for a relaxed TV afternoon at the weekend.

Who doesn't mind that this story has already been told a thousand times in different variations (and several times better of it), who can overlook a few smaller hangers and doesn't look for more than a simple TV comedy to switch off and languish a little, can definitely be recommended to "A Bride for Christmas". Worth seeing!

Picture + sound: The technical implementation of the film is on a solid TV level. The sharpness of detail can't keep up with that of big blockbusters, but especially in the brighter scenes there are no disturbing blurs. The very warm, powerful colouring leaves a particularly positive impression. The sound is, as is not uncommon in this genre, primarily focused on the frontal area, where the dialogues and the music take place. Real surround feeling rarely comes up. For a small TV romance all this is perfectly sufficient, which is why it is enough for a satisfied "good"!

Extras: As a bonus there are only program tips from the provider.

Result: "A bride for Christmas" is a very conventional TV romance that moves somewhere between "The bride who doesn't dare" and "One like none" and doesn't offer any big surprises. For a quite entertaining and romantic TV afternoon the comedy is enough. The DVD presents the film in good picture and sound quality, only bonus material is sought in vain. If you like simply knitted US romances, you can also take a look here outside the holidays. Recommended