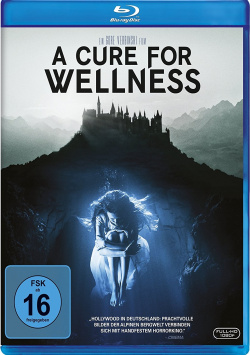 A Cure for Wellness - Blu-ray

Film: For the young stockbroker Lockhart (Dane DeHaan) only money and success count. To achieve this, he sometimes uses illegal means. This could now become his downfall when the board comes to his senses. Now he is threatened with dismissal and even imprisonment - unless he succeeds in getting the CEO of his company back to New York from a remote sanatorium in the Swiss Alps. He reluctantly sets off in the hope of being able to complete this task in a few hours. But when he arrives at the luxurious wellness resort, he soon has to realize that behind the picturesque façade abysses open up that could devour him too…

After the enormous success of his "Pirates of the Carribean" movies, director Gore Verbinski returns to the genre with which he celebrated his breakthrough 15 years ago with "A Cure for Wellness". His most recent work lives in particular from its almost hypnotic atmosphere, which is created by a perfect interplay of locations (the film was shot mainly in Germany), coloring and camera work. Especially the latter is simply ingenious. Verbinski has a good eye for special settings, which makes for some really fascinating moments here. Visually, the film is close to being a masterpiece. Unfortunately, he can't quite keep up in dramaturgy.

No question, there is something mysterious and exciting about history. A little bit of Thomas Mann's "Der Zauberberg", to which Verbinski pays tribute in a short scene, mixed with "Shutter Island" and "The Shining" - this is perhaps the best way to describe the story. At least until the finale, which almost reminds of wonderfully weird horror classics in the style of "Das Schreckenskabinett des Dr. Phibes". If it is undeniable that the first two hours offer stylistically first-class horror with gothic elements, the final 30 minutes can divide the spirits. Because what is offered here is completely abstruse and exaggerated and - if you can get involved with it - that's why it's so much fun.

Dane DeHaan is a (seemingly) emotionless careerist on the brink of madness as great as the wonderfully smug Jason Isaacs. Visually and acting this mystery thriller moves on a very high level. And even though the script has some small weaknesses and the staging is a little bit too long, Gore Verbinski has delivered a really good movie with "A Cure for Wellness", with some oppressive moments and well-dosed shock effects. Even though the film will have a hard time finding a wide audience right away, it is guaranteed to get the attention it deserves from genre fans over time. Absolutely worth seeing!

image + sound: I already mentioned that the film is a visual masterpiece. And this also comes into its own in the implementation for home cinema. Although the images on the small screen lose some of their power, the very special atmosphere achieved by the visual aesthetics is also created on the TV screen by the high sharpness of the images and the atmospheric colouring, as well as a successful image depth. The sound is largely restrained, but this is exactly what allows all facets of the great sound design to fully unfold. Very good.

>Extras: In an interview, Gore Verbinski explained that he had refrained from using data-guzzling bonus material for the best possible picture and sound quality. Therefore you have to be content with a cut sequence (about 4:46 min.), a feature about the film music (about 4:08 min.) and meditative clips about water (about 2:58 min.), air (about 2:44 min.) and earth (about 2:42 min.). Not really interesting and therefore negligible.

Fazit: "A Cure for Wellness" has some weaknesses and lengths dramaturgically, but visually the Mystery-Thriller is quite big cinema! The Blu-ray also makes this very easy to experience in home cinema. Picture and sound quality are more than satisfactory. Unfortunately, this can't also be said about the disappointing bonus material. Nevertheless, the disc as a whole is clearly one: absolutely recommended!