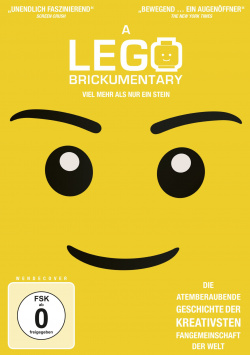 Content: It's an almost unbelievable success story: A small company from the Danish province makes an invention that revolutionizes the toy market. Small stones with a patented plug-in system become a hit all over the world. But after the great success comes the deep fall and the company is on the verge of bankruptcy. Only a drastic change in the product range can save the day and make the company the market leader again. To date, LEGO has sold over 400 billion (!) bricks worldwide. This success story alone would be worth a documentary. But LEGO also has a unique fan community beyond the children's rooms, which has finally helped the small bricks to absolute cult status. Meanwhile there are Lego fairs, Lego movies, Lego art, Lego exchange exchanges and and and…

"A LEGO Brickumentary" is an entertaining documentary, which deals primarily with the cult around the LEGO bricks. The history of the company, its fascinating rise, its near-end and the subsequent rescue by a drastic change of course, is dealt with relatively superficially and briefly. A lot of time is spent on fans all over the world. And also the LEGO movie, which came into the cinemas last year, gets a little bit of advertising again. So if you want to know more about the LEGO company, you might be disappointed by this film. But those who enjoy the infinite variety of what can be created with the stones will be well entertained here.

Whether you're visiting a variety of trade shows where fans exchange ideas or compete with fascinating buildings for the favor of other visitors, looking into the gallery of a New York artist who has created some fascinating works of art with LEGO, or looking at the construction of a large model from the STAR WARS universe that will finally be unveiled at Times Square in New York, you'll find all the facets of the LEGO fandom here. It is fascinating to note that among the LEGO fanatics portrayed here, there are people who have made a career with their passion - e.g. at LEGO itself - or who have founded their own business branches, such as the sale of weapons for LEGO characters, which do not exist in the original version because they do not correspond to the company's philosophy.

The film also shows that the love of LEGO extends across all ages and social classes. And many famous personalities are also infected by the LEGO virus and have their say in the documentation. All the examples shown here have one thing in common: LEGO encourages creativity in each of them in their own unique way. Whether you're creating your own models, staging small LEGO movies or creating art from LEGO bricks, it's clear that LEGO is much more than a simple toy. Crazy, original, fascinating and impressive - all this applies to what can be seen in this film. If you also have a certain affinity to the simple and ingenious connector system, you shouldn't miss this nice documentation. Worth seeing!

Picture + sound: Since only a data-reduced press sample was available for the test, no rating can be given here for the picture and sound quality of the DVD.

Extras: Bonus material is not available on the disc.

Fazit: "A LEGO Brickumentary" is an entertaining trip into the colourful world of LEGO fandoms. The interesting success story of LEGO is, however, worked off a little too superficially. You can meet fans from all over the world, admire LEGO art from New York or take part in the construction of a giant STAR WARS model. Those who are more interested in the LEGO cult than in the history of the company should not miss this amusing film. Recommended