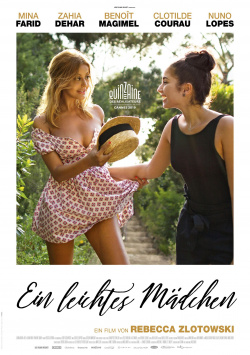 Naïma (Mina Farid) lives a modest but content teenage life in Cannes. But she dreams of being one of the rich and beautiful who can be found here in summer. But the 16-year-old girl does not know what the future holds for her after the school she has just completed successfully. When her older cousin Sofia (Zahia Dehar) from Paris unexpectedly appears, Na&iumlam's life is suddenly turned upside down. Because the young woman does not only look very worldly experienced, but also gives herself very open-heartedly and seems to live in pure luxury. Naïma doesn't really trust the beautiful appearance, but likes to be drawn into Sofia's world. When her cousin uses her charms to get closer to an attractive yacht owner, Naïma also plays the game - not knowing how much this will affect her life so far and her real friendships&.hellip;

"A light girl" is a beautifully photographed drama about longings and the pitfalls of growing up. An interesting story in itself, which is also very well played by the young leading actress Mina Farid. However, especially in the first half director Rebecca Zlotowski doesn't succeed in penetrating under the pretty surface of the pictures. The way in which Zahia Dehar, former muse of Karl Lagerfeld, is staged is more reminiscent of the soft-focus eroticism of David Hamilton than of giving real depth to the not uninteresting character of Sofia.

Naïmas's development is much more captivating. But here, too, the events remain superficial for too long. Towards the end, the dramaturgy becomes a bit more complex, but until then it becomes once more clear how long a mere 90 minutes can be. Yes, it is already clear why the beautiful pictures determine the events at the very beginning. After all, we want to explain why Naïma lets herself be blinded by the supposedly perfect life of her cousin and even abandons her best friend for the prospect of being a part of it.

"A light girl" captures the summer mood at the Côte d`Azur very well and can also coherently capture the burgeoning passions of a young person. But the good intentions, which are hidden somewhere in the script, get lost in the very well told beginning. Nice to look at, but unfortunately not very entertaining and therefore only: worth seeing with some exceptions!