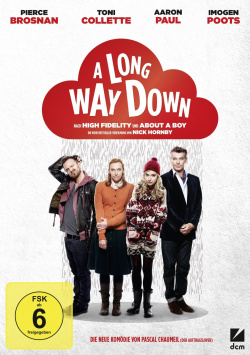 A Long Way Down - DVD

Film: The good times when Martin Sharp (Pierce Brosnan) was a popular TV presenter are long gone. After an affair with a young woman who later turned out to be a minor, Martin lost everything he cared about. So why go on living? On New Year's Eve, the former darling of the audience decides to put an end to his miserable existence. But when he wants to throw himself from London's Topper's Tower, he has to realize that he is not the only one who had this idea. Single mother Maureen (Toni Collette), 18-year-old Jess (Imogen Poots) and pizza supplier JJ (Aaron Paul) also want to say goodbye to life at this place. But in the face of an unexpected audience, the four of them call off their suicide. At the end of this unusual night the unusual quartet makes a pact: on Valentine's Day they will meet again at Topper's Tower, until then none of them will kill themselves. And so they have six weeks left - six weeks after which everything will look completely different...

"A Long Way Down" is another successful adaptation of a novel by Nick Hornby. The movie isn't quite as charming and amusing as "About a boy" and "High Fidelity". Yet, in spite of some somewhat stressful moments, the first international directorial work by the Frenchman Pascal Chaumeil ("Der Auftragslover") has become an extremely successful tragicomedy, which can score with a strong cast and some really wonderful scenes. In principle, it is difficult to approach issues such as suicide and depression in a humorous way. Nick Hornby's original novel manages well to strike a balance between seriousness and a loosening, life-affirming humor. And Chaumeil obviously also tried to master this balancing act. He often succeeds in doing so very well, whereas especially when it comes to humor it only rarely becomes clear that no British filmmaker was sitting on the director's chair here.

The movie doesn't only profit from the script filled with a lot of wordplay, but also from the really good actors, who couldn't be more different on the one hand, but on the other hand maybe harmonize perfectly with each other just because of that. Pierce Brosnan, who still shows his James Bond elegance during his suicide attempt, seems to have as little in common with Aaron "Breaking Bad" Paul as the wonderfully crazy acting Imogen Poots with Toni Collette playing the rather shy Maureen. It's just a lot of fun to watch how these unequal people become a community by chance and try to find their way back into life together.

Was "A Long Way Down" a comedy in general. But the dramatic aspect is neither trivialized nor completely marginalized by the humor. There are some very quiet and also quite moving moments in which it becomes clear why these four people want to take their own lives. Admittedly, too much depth should not be expected here. The film is not a journey into the abysses of the human psyche or a lesson about depression, but a simple entertainment film. Nevertheless, the script and the director display a pleasant sensibility when dealing with the subject matter, through which the humorous basic tone of the story doesn't seem disrespectful or inappropriately silly.

Instead there remains a very charming and entertaining overall impression, which despite the not exactly easy subject matter releases the viewer into reality in a good mood. "A Long Way Down" is certainly not a perfect movie and also not a particularly demanding work. However, as a simple feel-good comedy the whole thing works out quite well just because of the wonderful actors. Sometimes it's just the little things that help to increase the desire for life a little bit. And for that there is an absolutely deserved one: Worth seeing!

Picture + sound: The audiovisual realisation of the film on the DVD is on a good to very good level for a current cinema production. The picture is absolutely clean and pleases with a pleasantly warm color scheme and a high overall sharpness, which only shows a few small weaknesses in the detail display in dark moments. The sound is not unusual for a film of this genre, but rather reserved, whereby the dialogues sound well understandable from the loudspeakers. There aren't any big surround effects, but nevertheless the whole thing is pleasantly dynamic in many moments due to harmonious ambient noises and the film music. Good!

Extras: The almost one-hour bonus material consists primarily of promo interviews with the actors and makers (approx. 46:11 min.). There are also seven edited scenes including an alternative ending (approx. 7:54 min, without subtitles), some amusing outtakes (approx. 6:53 min), impressions from the world premiere in Berlin (approx. 3:25 min), as well as the trailer for the film. Gut!

Fazit: "A Long Way Down" is a charming, very life-affirming tragicomedy that scores with a lot of British humour and a great cast. Maybe not the best Nick Hornby adaptation, but still a really nice movie, that presents itself on the DVD in good picture and sound quality and also has some nice extras to offer. absolutely recommended!