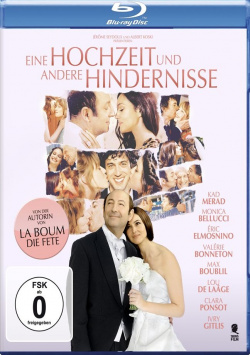 A wedding and other obstacles - Blu-ray

Contents: Diamond trader Roni (Kad Merad) and his wife Giovana (Monica Bellucci) are extremely proud to marry their beloved daughter Melita (Clara Ponsot). Of course Ronis brother, the musician Zef (Eric Elmosnino) is also invited to the celebration. But since the brothers have nothing in common and are not necessarily best friends, Zef doesn't really want to go to the wedding - a fact that doesn't make Roni sad. But then Zef's wife is killed in an accident and is supposed to be buried one day before Melita's wedding. This casts a dark shadow on the festivities, especially as Melita was so looking forward to celebrating her big day together with her cousin Noga (Lou de Laâge) - but of course he's not feeling like celebrating at all now. As fate plays out, the planning of the funeral leads to complications that also affect the wedding. But just how big the chaos that will be unleashed this weekend really is will only become apparent in the course of the following year...

Danièle Thompson, scriptwriter of classics such as the "La Boum" films or of various comedies with Pierre Richard and Louis de Funes, has for the fifth time sat on the director's chair herself for "A Wedding and Other Obstacles". As already in "A perfect place" or "Affären à la carte" Thompson again tries to mix humor with more serious undertones. At the beginning this doesn't really work out, though, as the staging here oscillates between too brave black comedy and shallow drama. There are indeed some very wonderful moments, but also many scenes in which a slight feeling of foreign shame spreads.

After the title-giving wedding is over and the action shifts to Saint Tropez, the whole thing seems much more coherent. Although the humorous aspect of the story is clearly diminishing and the film is more romance and amusing family film than a real comedy. But since it was humour that was a bit awkward at the beginning, its withdrawal has a rather positive effect on the entertainment value. So no big laughs should be expected. And also the expectation that Kad Merad and Monica Bellucci would play the leading roles should be reduced a bit. For even if at the beginning it seems as if the two unequal brothers Roni and Zef are at the centre of the action, Noga steps more and more into the centre of the story in the course of the film.

The finale seems to be badly constructed and somewhat far-fetched. However, this doesn't change the fact that the movie manages to win the sympathies of the audience until that point. Even though there isn't a lot that really works out here and it repeatedly becomes apparent that a much better movie could have been made out of all the good ingredients, "A Wedding and Other Obstacles" is somehow very charming and entertaining, which is also thanks to the actors. Danièle Thompson has already written much better stories in her career. But also here she managed some very nice and lovable moments again, which is why all weaknesses are still enough for a satisfied "sight worth seeing"!

image + sound: The image of the Blu-ray has a very high image sharpness and pleasantly powerful colors, which especially in the second half of the film in the beautiful shots of Saint Tropez real holiday feeling arise. As so often with comedies, the music and the powerfully mixed dialogues set the tone. But it is precisely the many ambient noises such as ocean noise that ensure that the sound mix sounds pleasantly lively overall. Good!

Extras: As a bonus, the Blu-ray only has the trailer for the film and further program tips from Tiberius Film to offer.

Fazit: With "A Wedding and Other Obstacles" Danièle Thompson has staged a well cast comedy, which at the beginning seems a bit indecisive, but at the end offers nice and entertaining entertainment. Even if the whole thing seems to be constructed badly, the staging in the second half radiates enough charm to console some minor weaknesses. Certainly not Thompson's best film, but the bottom line is that it is highly recommended for lovers of light French family comedies!