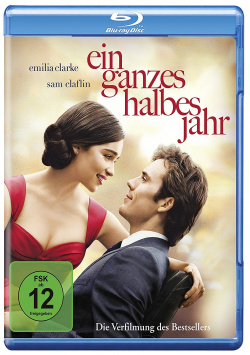 A whole half year - Blu-ray

Film: Louise "Lou" Clark (Emilia Clarke) is a fun-loving, carefree woman. There seems to be nothing to make her lose her optimism. Even when she loses her job in a small cafe, she doesn't give up. But the new job proposed to her by the employment office puts even a cheerful person like Lou to a hard test: she is supposed to look after the wealthy banker Will Traynor (Sam Clafin), who has been confined to a wheelchair since a serious accident two years ago. Will is filled with bitter cynicism and makes Lou feel at every opportunity that he doesn't want her around. The fact that she does not let herself be discouraged by this and eventually confronts him, however, impresses him greatly. And so a very special relationship slowly develops between the two, which is put to a hard test when Lou realises why she was really discontinued…

"A whole half year" was the most successful novel of the year in Germany alone in 2013 with 1.2 million copies sold. Jojo Moyes' book was translated into 32 languages worldwide and sold over 5 million copies. No wonder that a studio quickly found itself there, that secured the film rights to the story. Although this is not particularly original, it is strongly reminiscent of a mixture of "Ziemlich beste Freunde" and the Julia Roberts Schmonzette "Entscheidung aus Liebe". But despite well-known clichés and a good portion of kitsch, the story was very well received by the predominantly female readership - and that won't be any different with the successful film adaptation.

The film profits from several happy circumstances at once: First, there's the fact that Moyes wrote the script himself. She herself has decided which parts of the novel have been adopted directly, which have been modified, shortened or deleted. Although the dialogues aren't suspicious, they reflect the character of the book very well and bring the popular novel characters to life adequately. The mixture of drama, romance and a pleasant portion of humor is absolutely harmonious and makes sure that the whole thing never gets too sentimental. The story is simply beautiful and told in a pleasantly reserved way towards the end. This allows the emotions of the audience to unfold really well, which is guaranteed to lead to several handkerchiefs being used in every performance.

The movie's biggest plus point, however, is the cast, especially Emilia Clarke as Lou. Clarke plays a character here who is so far away from her strong role as Deanerys in "Game of Thrones" that you don't have the feeling to see one and the same actress for a second. Although you get afraid from time to time that her eyebrows might develop a life of their own, you get infected by the lovely charm and the radiant joy of life she radiates here, so you just have to love Lou. And Sam Clafin also delivers a very believable performance, which really gets to the heart in the second half of the movie.

Sure, especially profound entertainment is not offered here. Beautiful landscapes, sympathetic people and a story that is specifically geared to the tear glands are the not exactly surprising ingredients of a charming yet conventional production. But all the known elements have been mixed together so well that the result is a simple and movingly beautiful film experience that goes to the heart, that makes you laugh and cry and that celebrates the beauty of life and love. And the bottom line for this is quite clear: Absolutely worth seeing!

Picture + sound: The technical implementation of Blu-ray is at a very high level. The sharpness is great and allows even small details and the beautiful landscape shots to come to the fore. The colour scheme looks very warm and natural and the balance of black levels and contrasts also support the positive overall impression of the image quality. The same can be said for the sound. Although there is no big fireworks effect due to the genre, the surround channels are still used by atmospheric ambient noises and the beautiful soundtrack, which results in an overall very harmonious sound carpet. Very good.

Extras: Unfortunately, not much is offered here. An extremely short Making of (ca. 5:40 min.), a few missed scenes (ca. 2:15 min.), as well as seven unused scenes (ca. 6:11 min.) are offered to the viewer here. At least the edited scenes are worth seeing.

Fazit: "A whole half year" was a complete success not only as a book, but also in the cinema. The home cinema version of this beautiful film pleases with an atmospheric picture and sound quality. The bonus material isn't exactly extensive, but at least for its unique reputation it's well worth seeing. And so for the Blu-ray as a whole: Absolutely recommended!