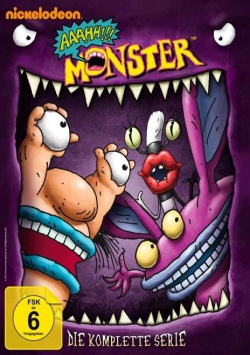 Content: The Academy for Monsters is located deep under a dump in New York. Here young monsters learn how best to frighten people. The Grummler, the rector of the academy, teaches with a hard hand what the up-and-coming monsters have to experience painfully on their first Halloween. Had they been so much looking forward to finally coming to the surface to spread fear and terror at the holiest of all monster days, the Grummler first orders them to be grounded due to the bad examination results - an order that none of the young monsters of course wants to stick to. Especially not the friends Ickis, Oblina and Krumm, who mingle with the people this evening and learn how difficult it is for monsters to be really scary on Halloween. But this is only the beginning of the many adventures that these three monsters experience together during their time at the Academy. On his birthday, for example, Krumm loses his beloved body odor and Ickis suddenly becomes rich when he finds thousands of old toenails on a man he's supposed to frighten - pure gold for monsters. Then the three of them land in the luggage of a little girl during one of their frightening missions and suddenly find themselves on board an airplane that they almost crash. And Krumm is not badly surprised when the pimple, which he so carefully cultivates to impress the beautifully scaly Horrifica, suddenly develops a life of its own. The Monster Academy really has a lot to offer - but peace and quiet or monotony is definitely not on the curriculum here...

"Aaahh!!! Monster" comes from the creative spirit of Gábor Csupò, the inventor of the "Rugrats" and former producer of the "Simpsons". Between 1994 and 1997, a total of 52 episodes of the weird cartoon series took place, which still enjoys a large fan base today. The monsters, who love everything that is disgusting, slimy and spoiled, get into wonderful bizarre situations again and again, which not only children can laugh heartily about. Here you can see some ideas, which later appear in the Pixar movies "Die Monster AG" and especially in "Die Monster Universität" in slightly varied form. However, "Aaahh!!! Monster" is much rougher and more original than Pixar's perfect computer animations, just because of its drawing style. And no matter how successful these two movies are, the somewhat dirtier style of the Csupò series somehow fits better to the world of monsters.

The series doesn't only live from its crazy stories and the weird humor embedded in them, but of course also from a good word joke, which has also been successfully transferred into the German version. In any case, the German dubbing, for which experienced speakers such as Helmut Krauss, Bodo Wolf or Wilfried Herbst were engaged, can be described as very successful overall. As with almost every series, some of the charm and wit of the original is lost. Nevertheless, the makers obviously tried hard to do justice to the good original synchro with speakers like Jim Belushi and Tim Curry.

Naturally, 52 episodes do not fail to repeat some gags and that some stories just don't work as well as others. Nevertheless, the multiple award-winning series leaves a positive overall impression, as it never tries to be as repulsively disgusting as possible, but always manages to stay charming even in somewhat less appetizing moments (the pimple sequence immediately comes to mind).

It's nice that the label Turbine has taken such cartoon series as "Aaahh!!! Monster", "Ren & Stimpy", "Rockos modernes Leben" or "Die Biber-Brüder" and gave the fans such beautifully designed complete boxes. This not only deserves praise, but also full support. Therefore monster fans and cartoon nostalgics should definitely use this box!

Picture + Sound: Your age cannot hide the series on the DVD. The colors are mixed relatively powerfully, but in terms of image sharpness there is always some potential for improvement, and there are always some slight pulling effects. But for a cartoon series more than 15 years old this is completely satisfactory. The same applies to the stereo mix, which transports the amusing dialogues out of the speakers in a way that is easy to understand.

Extras: Unfortunately, there is no bonus material. The box contains stickers, postcards and a poster.

Fazit: "Aaahh!!! Monster" is a cult cartoon series produced between 1994 and 1997 by Nickelodeon. Gábor Csupò, creator of the "Rugrats" and some time producer for the "Simpsons", has created a wonderfully bizarre, quirky series that is popular with viewers and critics alike, which still works really well 16 years after its end. The complete box of the series presents all 52 episodes of the four seasons in decent picture and sound quality. Fans and nostalgics should strike there absolutely!