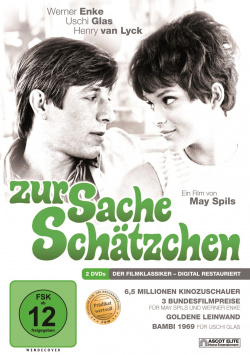 Film: 6.5 million viewers, three federal film awards, including the Golden Screen and a Bambi for leading actress Uschi Glas in a category created especially for this film - these are just some of the stations on the success story of "Zur Sache Schätzchen", the cult film from 1968. Director May Spils was the first German director of the post-war generation to surprise the cinema audience and critics with a comedy that hit the nerve of the time under its loose surface and thus had an enormous influence on the pop culture of the late 1960s. With its cheeky dialogues, the film also left its mark in German colloquial language. And for Uschi Glas, "Zur Sache Schätzchen" was the breakthrough to an acting career in German film and television that lasted over four decades.

Reason enough to give this classic film a digital treatment. And so the story about the bored songwriter Martin (Werner Enke) from Munich-Schwabing, who prefers to bring his environment to despair with his pseudo-philosophical ideas, until the lively Barbara (Uschi Glas) from a bourgeois house finally brings some momentum into his life, can be experienced in new splendour. And even after all these years it's still a lot of fun to rediscover or rediscover this movie for yourself.

Daough there are some aspects that are so strongly influenced by the sense of time of the late 1960s that they don't work so well from today's point of view, other scenes and dialogues still seem surprisingly fresh and amusing. Guys like Martin are actually still around in 2013 and his very own views on his environment and his fellow human beings also seem very dusty. The play of the actors, contrary to what one is accustomed to from many German comedies of the 1960s, is not too overly silly, but of an amusing casualness that somehow seems timeless.

Surely, it can never be denied at any moment that "Zur Sache Schätzchen" is a product of its time. And it can also be doubted that younger viewers will be able to make friends with the black-and-white look and the dialogues. But open-minded viewers over 20 who are interested in German cinema history, and of course all those who still know and love the film from their own youth, should be very happy about this digitally restored new release. Absolutely worth seeing!

Picture + sound: The film has been digitally restored for DVD and Blu-Ray release. You can still tell that the film has been on its way for more than four decades. Especially the mono sound is a bit dull, the stereo mix is a bit more powerful. And the black-and-white image also has some minor weaknesses here and there. But all in all the polished version leaves a very good visual impression in terms of sharpness and cleanliness, so that there is an absolutely deserved "good" here.

Extras: As a bonus the DVD has two short films by May Spils from 1966 ("Das Portrait" and "Manöver", each about 10 min.) as well as one of the rare interviews with Werner Enke from 2012 (about 10 min.). There is also a 12-page booklet with background information on the film. Gut!

Fazit: "Zur Sache Schätzchen" is one of the classics of German post-war film. The comedy, which attracted more than 6 million viewers to the cinemas in 1968, became a career springboard for Uschi Glas and a cult film that still works very well after more than 45 years. The digitally restored version presents the classic in a new splendour and also offers the viewer some nice extras. But there is a more than deserved one: Recommendable!