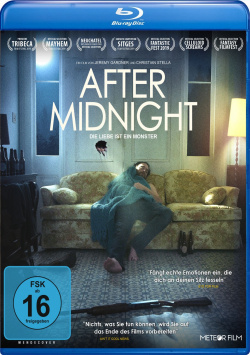 Film: It all seemed so idyllic and harmonious when Hank (Jeremy Gardner) and Abby (Brea Grant) moved into their new house. Here the couple has built a little paradise for themselves - but now Abby has escaped from it. Hank just remained a farewell letter. Every attempt to win her back fails miserably. So Hank sinks more and more into self-pity. But that's not his only problem. Because at night his house is attacked by a monster that leaves scratch marks and makes scary noises. But Hank doesn't really want to believe that. And so he is completely on his own in the fight against this mysterious creature.

As in "Ben & Mickey vs. The Dead", director, screenwriter and leading actor Jeremy Gardner once again manages very well with "After Midnight" to stage an entertaining mixture of Generation X comedy and horror with a mini-budget. Admittedly, this takes some getting used to due to long dialogues, sudden vocal interludes and some rather trashy effects. However, if you can get into it, then you'll be entertained quite well. That's not only because the conversations between Hank and his buddy Wade are wonderfully wacky in an amusing way. When you look at the good times between Hank and Abby, you also get really believable emotions.

Even if Gardner isn't the best actor now, it's quite understandable why the sudden disappearance of Abby throws Hank off track in such a way. The scenes in which he is not only haunted by this loss, but also by a monster invisible for him and the viewer, are also pleasantly effective and actually create something like a light horror. However, if you expect non-stop horror then you might be disappointed. Because the sequences between the nightly attacks are the ones that dominate the movie.

"After Midnight" therefore doesn't impress with real monster-horror so much as with the story in which it is embedded and with this very special atmosphere that Jeremy Gardner creates by mixing different genres. If you like original indie fare from the USA and enjoyed Gardner's first release "Ben & Mickey vs. The Dead", you will be well served by this flick again. Worth seeing!

Picture + sound: One may see from the film that there was no particularly large budget available for its realization. Nevertheless, the picture and sound quality of the Blu-ray leave an absolutely decent overall impression. The picture is clean and sharp. Only in darker scenes there are some small weaknesses in the sharpness of details and the contrast. The color scheme, which has a special meaning in some scenes, is harmonious and atmospherically implemented. The Dolby Digital 5.1 mix is determined in many scenes by the dialogues, but has a few decent surround moments here and there. Good!

Extras: As a bonus, there is an audio commentary with the two directors, which is, however, a bit difficult to understand in places and is presented without subtitle option. So listening to it can be quite exhausting, even if the commentary is interesting and sometimes very amusing. Apart from that there is only the trailer for the movie on Blu-ray. If you want more extras you have to go for the Limited Edition Media Book. Here you can get a bonus disc with outtakes, a look behind the scenes and more.

Fazit: "After Midnight" is a weird mixture of comedy, romantic drama and horror thriller with light trash elements. If you liked Jeremy Gardner's "Ben & Mickey vs. The Dead", you've come to the right place. The Blu-ray is technically well implemented, but apart from an audio commentary it has no extras to offer. This is only available on the bonus disc of the Limited Edition Media Book. Recommendable!