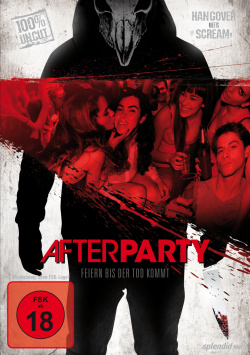 Film: Was Carlos (Lucho Fernández) a celebrated TV star. But all the hustle and bustle associated with it is slowly becoming too much for him. Especially after his relationship with his serial partner Maria (Ursula Corberó) and her end were exploited in the press and various internet forums down to the last detail. With his successful horror series, Carlos has actually long since finished, now he dreams of a career in Hollywood. That's why he doesn't feel like going to the big studio party at the end of the current season, where he's only supposed to kiss the producers and studio bosses butt anyway. Instead, he prefers to party at a party thrown by some girls from his fan forum. Drugs, alcohol, hot girls and unrestrained sex - this night couldn't have been better. When Carlos wakes up the next morning next to the attractive Carla (Alicia Sanz), he is accordingly in a good mood, apart from a nasty hangover. This suddenly changes when he realizes that the spacious villa where the exuberant party was celebrated is now completely sealed off and he is locked up with Carla, Lucia (Rocío León) and Alex (Ana Caldas). What at first looks like a bad joke by Ana (Andrea Dueso), a friend of the girls, soon turns out to be a deadly trap. Because the four imprisoned are not alone...

"Afterparty" is a Spanish horror thriller that mixes elements from "Scream", "Sorority Row" or "Haunted Hill" with a pinch of party film a la "Hangover". A little splatter, some sex, attractive actors and an atmospheric dark location - actually the best ingredients for proper genre entertainment. And by and large, the film delivers that, too. The dialogues are very flat, the play of some actors a bit wooden and the dramaturgy not very original. But even if the big turn of events is quickly predictable for connoisseurs of the genre, the entertainment value is actually always on a good level.

The last two minutes turn the story into something like a little satire on the merciless entertainment industry. But unfortunately that's too late and far too little to give the movie a little depth in content. The potential for this would have been there, but it is used only marginally. Instead, director Miguel Larraya prefers to rely on well-tried ingredients of common slasher movies for his feature film debut, which he mixed together in an entertaining, but not surprising way. However, this shouldn't be what some horror fans will be bothered about. For her the biggest weak point will be that the movie is quite harmless in spite of some bloody moments and there is too much talking and partying in the short 76 minutes to be able to create real tension and thrills.

Nevertheless "Afterparty" offers enough entertainment value despite undeniable weaknesses to be considered worth seeing. If you don't expect a big hit and like movies like "Sorority Row", you can confidently accept the invitation to this party!

Picture + Sound: The clean picture of the DVD has a good overall sharpness, but in the numerous darker scenes here and there there small weaknesses in the details. The sound has some atmospheric surround effects, but they are not spectacular overall. The dialogues are easy to understand, but also very centrally mixed. No audiovisual revelation, but the bottom line is perfectly alright. Good!

Extras: As a bonus the DVD only offers the trailer for the movie.

Fazit: "Afterparty" is a spanish horror movie, which doesn't win over many new sides of the genre, but knows how to entertain properly. The tension is limited, but the villa, in which the bloody hustle and bustle takes place, is very atmospheric and the actors are quite convincing despite the rather stereotypical character drawing. The resolution isn't really surprising, but due to the successful ending it has a bite that almost borders on media satire. Not a big success, but this party offers entertaining slasher entertainment. Worth seeing