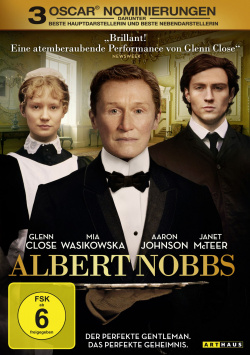 Contents: Ireland in the 19th century: for many years the butler Albert Nobbs (Glenn Close) belongs to the esteemed staff of the Morrison´s Hotel. Nobbs goes about his work with a lot of dignity and passion and collects every penny the guests give him. Because the big dream of his own business helps him through every difficult day. Albert Nobbs is valued and respected by his colleagues. But what nobody suspects: the butler has a big secret which, if discovered, could ruin his life forever. In reality, Albert Nobbs is a woman who long ago decided to dress up as a man in order to be able to earn a living on her own. The game of hide and seek went well for a long time. But when the hotel manager Mrs. Baker (Pauline Collins) hires the painter Hubert Page (Janet McTeer) to work in the hotel and orders him to spend the night in Nobbs' room, her secret threatens to be discovered. The fact that Nobbs falls in love with the beautiful maid Helen (Mia Wasikowska), who is also in love with the irascible Joe (Aaron Johnson), isn't really helpful in this situation...

Already in 1982 Glenn Close was on stage in the stage adaptation of George Moore's novella "Albert Nobbs". Since then she has dreamed of a film version of the material. Under the direction of Rodrigo Garcia ("Mothers and Daughters", "Six Feet Under") the long lasting efforts of Close 2011 could finally be realized. The actress, who was nominated six times for the Oscar, and who besides the leading role also acted as co-writer and producer, put all her heart and soul into this film, which is clearly noticeable in her subtle but nevertheless extremely passionate performance. The reward were three deserved Oscar nominations and various awards, especially the Irish IFTA Award.

The film, shot at locations in Ireland, has a great set and excellent camera work, for which the Scot Michael McDonough ("Winter's Bone") is responsible. But what the film scores with in the first place is the extremely strong cast, which brings Moore's story to life in a captivating and empathetic way. Glenn Close deserves a lot of credit for the fact that she's so withdrawn in her game that even her co-stars can shine accordingly. And Mia Wasikowska ("Stoker"), Mark Williams ("Harry Potter"), Aaron Johnson ("Kick-Ass") and of course the Oscar-nominated Janet McTeer, who also took on a role next to Close in their series "Damages", really succeed in doing so excellently. The film is not only a great set, but also a rousing acting cinema.

Although the entire setting and the plot are marked by a certain heaviness and darkness, "Albert Nobbs" manages again and again to let beauty, poetry and hope prevail over the sadness of the story. Of course, the movie isn't just a feel-good cinema, but the script and direction manage very well to prevent the viewer from being overwhelmed by the dramatic heaviness, which would have meant that the outstanding performance of all those involved in front and behind the camera could have been fully appreciated. But not only a certain sadness, but also a very clear beauty of the story can unfold, which emotionally moves the viewer in the end, but doesn't leave him completely depressed.

Whoever likes sophisticated historical dramas and moving stories that don't follow the paths that are overused in British cinema and inspired by Jane Austen's novels, can warmly recommend "Albert Nobbs". Absolutely worth seeing!

Picture + sound: The picture on the DVD shows off the excellent work of the outfitters and set designers to best advantage thanks to the good image sharpness, harmonious contrasts and very atmospheric colouring. The sound is, as usual for this genre, rather discreet, as the events are primarily determined by dialogues and the quiet soundtrack. However, a few well-transformed ambient noises and smaller sound effects repeatedly ensure that the surround channels are also used. Good!

Fazit: "Albert Nobbs" is an excellently played drama, which can score with a moving story and a great equipment. You can tell every second that Glenn Close had this project especially close to her heart and that she put all her passion into it. A really big acting cinema, which is also absolutely worth seeing on the screen. Recommended