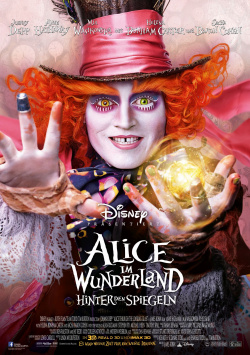 Alice in Wonderland: Behind the Mirrors

After her fantastic experiences in Unterland Alice Kingsleigh (Mia Wasikowska) has spent the last few years looking for the big adventure in her world. She inherited her father's legacy and sailed the seven seas with her ship. Back in London, however, she has to realize that her entire existence is threatened and that the future she dreamed of will not be possible. But she doesn't have long to worry about it. Because suddenly she is back in the lowlands, where her good friend, the crazy hatter (Johnny Depp), is not well at all. To help him, Alice must personally visit the time (Sacha Baron Cohen) to get from her the chronosphere with which she can travel back in time. There she will save the hat maker's family. But time doesn't want to allow anyone to change the course of events and the evil Iracebeth (Helena Bonham Carter) also wants to prevent Alice from succeeding with her plan at all costs. For she has her very own plans with the chronosphere, to finally become the sole ruler over Unterland again…

The children's book "Alice in Wonderland" by Lewis Caroll, first published in 1865, has an enormous influence on the most diverse areas, from literature to theatre, art, music and even psychology. Of course, the medium of film has always directly or indirectly taken on the motifs of history and its continuation. Well over thirty film adaptations have been made to date, with the Disney cartoon of 1951 and Tim Burton's 3D spectacle of 2010 probably the most successful adaptations. The latter was able to raise more than 1 billion dollars at box offices worldwide, which is why a sequel was only a matter of time. It quickly became clear that Caroll's second "Alice" book wouldn't be taken as a model, as this only consists of rather loosely connected episodes that can't be adapted as great cinematic adventures. Now, with "Alice in Wonderland - Behind the Mirrors", a story has finally been found that can stand on its own two feet, but can do justice to Caroll's spirit.

This time, James Bobin, who successfully revived the "Muppets" in the cinema in 2011, has taken over the direction. Although Bobin visually adheres closely to the style that Tim Burton has established in his film, he is not afraid of the fact that the film is a film. Otherwise, however, he tries to impose his very own handwriting on this sequel. And this is really good for the colourful fantasy adventure. Instead of a warmed-up copy of the first part, the viewer gets a real sequel here, which brings back all the popular characters of the predecessor and puts them into a whole new story. This may not be very original, but it can convince over long distances. However, there are some aspects that don't really want to work.

So some aspects of the story have an episodic character. In themselves, these parts of the movie are well done, yet they don't really fit together to a harmonious overall picture. The best example of this is a scene in which Alice briefly returns to her world. Although this sequence is very funny, it is completely unnecessary for the story itself. In addition, she is staged in such a rushed manner that every stop in the already somewhat shaky plot construct is a stop for her. It's such moments that spoil the fun of this otherwise well done sequel a bit. It is thanks to the many small details, the good effects and the cheerful ensemble that "Alice in Wonderland - Behind the Mirrors" works so well in the end.  Especially Helena Bonham Carter and Sacha Baron Cohen, whose accent in the English original version sounds very much like Werner Herzog, steal the show from the other actors again and again.

Although the finale is a bit sweet and the story loses itself in trivialities from time to time, James Bobin has managed an entertaining fantasy adventure for the whole family, which doesn't have to hide from the first part. Those who liked Tim Burton's "Alice" should definitely travel with her to the country behind the mirrors. Worth seeing