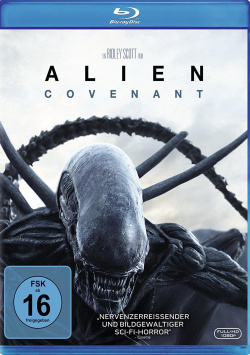 Film: Ten years have passed since the crew of the "Prometheus" disappeared on their mission to the moon LV-223. Now another spaceship is on its way in the depths of space. This time the "Covenant" became on its way to an earth-like planet to prepare the colonization by humans. When the crew members are awakened from their artificial deep sleep early on due to damage to the sun sails, they notice a nearby planet which could also be suitable for a new habitat for mankind and which is much closer than the actually intended goal, the team decides to venture a small detour into this world. Everything seems to be perfect - until one of the crew suddenly shows symptoms of a mysterious disease. And suddenly a nightmare of unimaginable proportions breaks over the settlers…

With "Alien: Covenant" Ridley Scott continues the "Alien"-Prequel path, which he took in 2012 with "Prometheus". For all those who were dissatisfied from the first part of prehistory to one of the undeniably best science fiction movies of all time, there is good news, but also bad news. The good news is that the new movie is the best in the franchise since James Cameron's "Aliens". The film looks fantastic and has some bloody performances of Xenomorph, the mother of all aliens. The bad news, however, is that the film continues to expand the philosophical aspects already touched upon in "Prometheus" in equal parts. As a result, the action and tension that Scott builds up here time and again is regularly slowed down. This prevents a harmonious overall picture, which unfortunately significantly reduces the effect of the whole thing in the end.

In addition, the story does not really take on convincing new facets from the "alien" universe. Rather an explanation for the emergence of the Xenomorph is delivered here, which may sound quite interesting, but which on closer consideration is really completely imbecile and unfortunately also has a negative effect on the great first two parts of the series. This brings back painful memories of George Lucas' attempt to explain the power of the so-called Midi-Chlorians in the "Star Wars" prequels. Some things may be better left unexplained.

To this can be added the completely nonsensical and reckless behavior of some crew members, which raises the question of whether there was even a single training course for behavior on a foreign planet before the start of the mission. This blatant weakness in the script is all the more annoying because the crew of the "Covenant" is much more interesting than that of the "Prometheus" - even if they had the great Idris Elba with them.

"Alien: Covenant" always works when the movie mutates to a real horror. And the scenes in which Michael Fassbender is allowed to play with or against himself are also great cinema. Visually, the film is absolutely great and the atmosphere that Scott has built up here from the beginning makes it clear that the filmmaker still has what made his 1979 SciFi classic so special. Unfortunately, however, the mixture of alien horror and deep psychological treatise on the origin of life only wants to function to a limited extent. No question about it, despite all its weaknesses "Alien: Covenant" is a good, at times even very good movie. However, there is a masterpiece slumbering in him that Scott has destroyed through bad script decisions. It remains to be seen whether this can be corrected with the next prequel, which has already been announced (but is still in the stars at the moment due to the rather weak performance of "Covenant" at the box offices). It's a fact that the quality curve points upwards after the decent but somehow disappointing "Prometheus". And if this trend continues, then the third prequel could finally become the "Alien" movie fans have been waiting for since Cameron's 1986 sequel. But all in all there is already a clear one: Worth seeing!

Picture + sound: The audiovisual realization of the film leaves a more than convincing impression. The image sharpness is at a very high level overall. Even in darker scenes smaller details are very well recognizable. In addition, the completely undisturbed visual implementation convinces with a good image depth and an undercooled atmospheric colouring. The sound is in no way inferior. The numerous sound effects are excellently implemented and ensure good three-dimensionality even in quieter scenes. Full basses and the good tuning of voices and film music allow only one conclusion: Very good!

Extras: Not quite as extensive as one is used to from Ridley Scott's films, but nevertheless the bonus material of the Blu-ray presents itself absolutely satisfactory. It starts with an optionally subtitled audio commentary by the filmmaker, in which Scott offers interesting insights into the production and talks in detail about his intentions in some scenes. There follow 12 extended and edited scenes (approx. 17:37 min.), which among other things show a retrospective in which James Franco, who appears only briefly in the film, can be seen a little longer. The prologue can also be seen here in a longer version.

The next step is a four-part Making of (approx. 55:30 min.), which offers a good insight into the production of the film. The trailer rounds off the good additional offer. Worth seeing!

Fazit: "Alien: Covenant" was not the hit at the box office that the studio had hoped for. This can't have been because of the movie, because despite some weaknesses it offers very good entertainment and a lot of suspense. The Blu-ray convinces with a good picture and sound quality and also has some good extras on board. All of this is clearly enough for the bottom line: absolutely recommended!