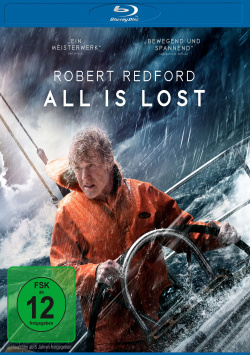 All is lost - Blu-ray

Film: Actually he just wanted to do a relaxed sailing trip and escape from his everyday life. But when his sailing yacht collides with a container floating in the sea, a bitter fight for life and death begins for the man (Robert Redford). Without a radio and navigation system, he's on his own. In the hope that the current will lead him to a busy shipping route, he has to defy the scorching sun and his fears in his poorly repaired boat. But soon the next deadly danger threatens with an approaching storm...

After his ensemble piece "Der große Crash - Margin Call" (The Great Crash - Margin Call), which is almost exclusively based on dialogues, director and screenwriter J.C. Chandor delivers with "All is lost" a film that seems to be the complete opposite of its predecessor. The one-man chamber play on the high seas gets along, apart from a call for help by radio, completely without dialogues. Finding sponsors for such a project was of course not easy. But with much perseverance and Robert Redford on board, Chandor was able to raise the necessary funds and, after careful preparation, put his deep-sea drama into practice in just 30 days. And he really succeeded in doing a small masterpiece. For the work filmed on the coast off the Mexican Ensenada, in the Bahamas and in the gigantic studio in which the "Titanic" has already disappeared has become extremely gripping and exciting despite all minimalism.

Although Chandor takes his time to show less exciting things such as repairing the outer skin or cleaning the radio in relative detail, boredom never really arises. This is due to the tension-laden basic atmosphere, which Chandor constructs very subtly, but all the more effectively. As a spectator, one simply feverishes along with the nameless man as to whether he succeeds in freeing his yacht from the container, closing the leak or somehow being able to send out a call for help before the next big storm comes. With wonderful images, which in many moments manage completely without digital effects, the vastness and depth of the ocean receive a fascinating threat that is hard to escape.

To carry such a film, whose screenplay consists of just thirty pages, all by itself, requires not only great acting talent, but also a good deal of courage. Robert Redford fortunately brought both. His portrayal is completely withdrawn and thus so believable. His castaway is not an overstyled hero, not an artificial figure, but a completely normal man who is therefore very accessible to the viewer. And that's exactly why this fight for survival is so captivating even in its many quiet moments.

Surely you have to get involved in this very special "silent movie". Tempo, action, cool sayings - all these typical blockbuster ingredients "All is lost" doesn't have to offer. Nevertheless, J.C. Chandor, with the help of his great lead actor Robert Redford, has succeeded in making a really big movie that proves that you can achieve a maximum effect even with minimal means. This is a very special kind of tension cinema and in any case: absolutely worth seeing!

image + sound: Technically, the Blu-ray convinces all along the line. Since the film almost completely does without dialogues, the sound lives from the great sound design. And the DTS-HD 5.1 MA mixer is a perfect example of this. From the creaking of the ship's planks to distant thunderstorms to destructive storms, small and large sound effects are implemented very dynamically and effectively. Also the absolutely clean and very sharp picture leaves a consistently positive impression. It has a pleasant depth, through which the threatening vastness of the sea is also shown to advantage in home cinema. Very good!

Fazit: "All is lost" gets along almost completely without dialogues and with only one actor. And even though the whole thing also takes place on a rather small yacht, which floats around on the sea for long stretches of the movie without being maneuverable, without really much happening, this survival drama is an extremely thrilling movie, that proves that you can achieve a maximum effect even with minimal means. The Blu-ray of the film is technically first class and the bonus material gives a lot of information about the shooting. All in all, there is one for it: absolutely recommended!