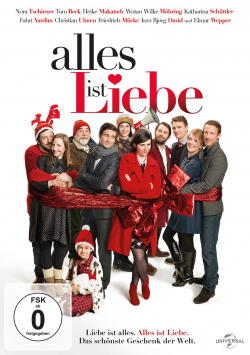 All is love - DVD

Film: Christmas is just around the corner and love is everywhere. Everywhere? I wish. Kiki (Nora Tschirner), for example, has been searching for the right one for a long time after she was abandoned ten years ago by her great love Jan (Tom Beck). And of all people Jan, now a great Hollywood star, stands before her again. Clara (Heike Makatsch) also has problems with love after she betrayed her husband Hannes (Wotan Wilke Möhring) with the teacher of her son Boris. But Christmas is actually the time of forgiveness and second chances. But can Clara really ever forgive such a fling? For Klaus (Friedrich Mücke) and Viktor (Christian Ulmen), on the other hand, the future actually looks rosy, as their wedding is scheduled in time for Christmas. Viktor is so busy with the preparations that he doesn't realize that his Klaus is plagued by great doubts and threatens to fall into a deep emotional hole. Kerem (Fahri Yardim) wants to protect his highly pregnant wife Simone (Katharina Schüttler) from such a thing. Therefore, she must never learn that he lost his job months ago and that he put her last savings into all kinds of plastic toys that he wants to sell at the Frankfurt Christmas market. The plan seems to work out, too, until his daughter falls into the Main at a Christmas show on the Museumsufer and Kerem has to leave his stand head over heels. Luckily, Santa saves the little girl from drowning. Martin (Elmar Wepper) doesn't like the fact that he is now celebrated as a hero at all, after all he came to Frankfurt to face a rather unsightly chapter of his past. But the TV recording director Alice (Inez Bjørg David) realizes how important Martin could be as Santa Claus not only for her career. And so she sticks to his heels, no matter how much he wants to shake them off. Emotional chaos wherever you look - and Christmas Day is getting closer…

In a Christmassy ensemble romantic comedy, associations with "Tatsächlich…Liebe", the ultimate Christmas romance, naturally arise immediately. This connection isn't far-fetched either, as Markus Goller's film ("Friendship!", "Eine ganz heiße Nummer") is based on the Dutch comedy "Alles is liefde", which in turn clearly originated in the waters of "Tatsächlich…Liebe". But even if nothing really new is offered to the audience here, "Alles ist Liebe" works really well with its mixture of humor, kitschy Christmas romance and big feelings - true to the motto: "Better well cribbed than weakly self-conceived".

Whoever expects subtlety or dramaturgical depth is wrong here. Everything here is very direct and obvious. It is played almost manipulatively on the emotional keyboard, be it with the music, the beautiful pictures of Christmas Frankfurt or the big eyes of the child actors. And the course of the individual storylines should be clear to anyone who has ever seen a romantic comedy after a few minutes. Surprises of any kind are completely absent here. This may not sound really intoxicating right now. But in its very direct, simply constructed way, the film achieves exactly what it wants: it makes its audience happy and gives them two hours of charming escape from reality.

"Alles ist Liebe" does not claim to be a profound social study or intellectual head cinema. The film is an enchanting winter fairy tale with clearly defined characters and a dramaturgy limited to the essentials, which allows the audience to simply be lulled by the warmth of the story. The good performer ensemble also contributes to the high entertainment value. Great acting is rarely recognizable. But they all make sure that the figures they embody are brought to life in a very sympathetic way. While Elmar Wepper, Heike Makatsch or Wotan Wilke Möhring are more responsible for the quiet tones, Fahri Yardim or the wonderful interplay of Nora Tschirner and Tom Beck always provide a hearty laugh.

Sure, "Everything is Love" is kitschy and clichéd, often exaggerated and also a little silly. But the staging has a lot of heart and especially at Christmas it is just beautiful. So if you don't expect any great demands and just want to languish heartily, this German ensemble comedy can be warmly recommended to you. Absolutely worth seeing!

Picture + sound: The picture on the DVD is absolutely clean and also pleases with a high picture sharpness, through which even smaller details in most scenes come into their own very well. The colour scheme is slightly alienated, but captures the Christmassy atmosphere of the comedy and the beautiful shooting locations in Frankfurt very well with the consistently warm tones and their powerful implementation. As usual in this genre, the sound is mainly dominated by the dialogues and the atmospheric soundtrack, but here and there there there are also some well used ambient noises or small sound effects, which also demand the surround channels. Good!

Extras: The bonus material consists primarily of short promotional material. So there are advertising clips about the story (about 3:04 min.) and the characters (about 3:36 min.), as well as some interviews with the makers and actors (about 35:13 min.), and uncommented B-Roll recordings from the shooting (about 10:39 min.). In addition, there is a video about the fun the participants had on the set (approx. 3:34 min.), as well as a script with some short clips about the actors' love for Christmas markets or shooting in Frankfurt (approx. 14:50 min.). The trailer and impressions from the premiere in Berlin (approx. 4:15 min.) round off the nice, but also very advertising heavy additional material.

Fazit: "Alles ist Liebe" is kitschy, overdone and very clichéd - but also charming and amusing. A really nice Christmas movie with a lot of heart and some nice pictures from Frankfurt. The DVD presents this ensemble comedy in good picture and sound quality. The bonus material is decent, but consists primarily of promotional material, which doesn't really offer a deep insight into the production. If you don't expect too much demand and just want to languish heartily, this Christmas film can be recommended to you. Recommended