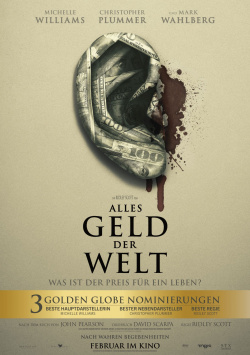 All the money in the world

1973: Shock for Gail Getty (Michelle Williams): Her 16-year-old son Paul (Charlie Plummer) was kidnapped in Rome. The reason is quickly found: After all, Paul is the grandson of one of the richest men in the world, the billionaire oil magnate J. Paul Getty (Christopher Plummer). The $17 million ransom demanded by the kidnappers could be deducted from Getty's postage costs. But the old man doesn't even think about paying a cent. Getty is convinced that his money would only attract imitators - and that could be damn expensive for 13 grandchildren. But Gail doesn't want to put up with it. She fights doggedly for her son's life and gets help from Gettys security advisor, the former CIA agent Fletcher Chase (Mark Wahlberg). But time is running out and J. Paul Getty doesn't seem to want to move away from his position…

For a filmmaker there is hardly a greater catastrophe than when the hard work of many talented people is completely pushed into the background by a scandal about one of the actors shortly before the release. It was precisely this fiasco that Ridley Scott was confronted with. Just when he had finished "All the money in the world", the supporting actor Kevin Spacey, who had already been highly traded for an Oscar, made the well-known headlines. Now Scott only had the chance to postpone the release of the film or to stick to the planned release date in the hope that the quality of the film would mask the scandal surrounding Spacey. Knowing that this would probably not be the case, he decided on a third option: He cut Spacey completely out of the film and re-created all his scenes. Oscar winner Christopher Plummer stood in for Spacey.

In just 15 days, not a few scenes were shot anew and then integrated into the film. If this had not been made public in such a way, it would not be noticeable at all in the finished work. And that's exactly what Scott, an outstanding Christopher Plummer and the rest of the team have to acknowledge as a masterpiece. Of course, "Alles Geld der Welt" will always be the movie from which Kevin Spacey was cut. But thanks to the re-recordings, Ridley has managed that the audience can concentrate fully on the story and the great performances of the actors, at least during the movie. Moreover, unlike Spacey, Plummer did not have to be hidden under an elaborate make-up, from which the scenes with the ice-cold calculating billionaire can also benefit.

Scott's reconstruction of one of the most sensational cases in criminal history is truly magnificent in terms of craftsmanship. Look and feel capture the early 1970s perfectly. And although it doesn't take long research to find out how the kidnapping ended - if you don't already know it - Scott's production manages to build up an atmospheric tension that is given an unexpected intensity towards the finale. Apart from that it is simply a pleasure to watch Michelle Williams, Christopher Plummer and Mark Wahlberg play their very good game.

Except for a few short lengths, "All Money in the World" is a gripping kidnapping thriller and a bitingly cynical drama in which the boundaries between good and evil, between perpetrators and victims become increasingly blurred. A very good movie that deserves attention for its quality and not because of any scandals. Absolutely worth seeing!