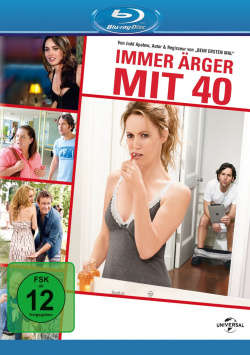 Film: Actually the married couple Debbie (Leslie Mann) and Pete (Paul Rudd) were born in the same year only a few days apart. Nevertheless Debbie is not celebrating her 40th birthday this year like Pete, but her 38th birthday. Because she just doesn't feel ready for the 40 yet. There is still so much that she wanted to have done and experienced before, so two additional years are simply necessary. Pete has no problem playing the game for his wife. And also when she starts to change the family's diet and change all the pleasant aspects of everyday life with health conscious and responsible things, Pete takes that in a relaxed way on the outside. But inside he's bubbling. He withdraws more and more often, doesn't tell Debbie that his record label is about to be closed and that he still gives his father (Albert Brooks) money on a regular basis, which he would actually need much more urgently right now. The fact that his daughters Sadie (Maude Apatow) and Charlotte (Iris Apatow) also need constant attention doesn't make things any easier. And so the tensions increase more and the feelings decrease more and more, until the question arises whether love is still enough to really spend the rest of life together...

The couple Debbie and Pete are already known from the comedy "The First Time", where the two played only a minor role. Nevertheless, in "Immer Ärger mit 40" Judd Apatow has now put her in the center of a story of her own, which he once again staged as a mixture of very true-to-life moments and coarser humor. In front of the camera family members like wife Leslie Mann and their two daughters Maude and Iris, but also many friends like Paul Rudd and Jason Segel are allowed to act again. The family atmosphere that this creates on set is a significant factor in the functioning of Judd Apatow's films. Because of the good chemistry between the actors there is a certain credibility, which makes the characters very authentic despite some exaggerated characteristics.

Thus many viewers will be able to recognize some situations from the chaotic family life of Debbie and Pete. Especially in the first half of the movie this is usually very funny, but at the same time it also doesn't spare some more unpleasant moments. Although "Immer Ärger mit 40" is first and foremost a comedy, since it doesn't only want to portray the highs, but also the many lows of a marriage, more and more calm and dramatic moments come to the fore. This mixture has already distinguished Apatow's earlier films, but seldom appeared as lifelike as here.

While some dialogues are quite great and the film has many beautiful ideas to offer, such as the daughter possessed by the series "Lost" (every fan of the series will be very happy about the amusing confrontation with the last episode) or the revelations of the types of deaths that one wishes the partner, other aspects simply can't convince. The somewhat inflationary effort to use ordinary dialogues and unnecessary secondary figures clouds the positive overall picture a little. It remains the impression that the movie didn't really need more than two hours running time and would have worked much better and more coherent in a tighter version. Surely, it's simply Apatow's style to counter the threat of kitsch by regularly using gags below the belt. But in the long run it's just not as funny as in his first movies, instead it seems a bit too hard and predictable.

No question, "Immer Ärger mit 40" is a charming and funny movie especially for those viewers who can laugh about the typical Apatow humor. When Debbie makes a classmate of her daughter's howl because he's been unpleasantly talking about Sadie on the internet, or when Pete then messes up with this boy's crazy mother (Melissa McCarthy), it's as much fun as the unrestrained drooling men watching Megan Fox in a tight bikini. Still, especially in the second half the comedy too often lacks pacing, as the story is unnecessarily inflated again and again. That's nice and amusing, but not much more. But those who like "the first time" or "how life plays like this" can also be recommended to this marriage crisis. Therefore, the following applies: Worth seeing with concessions!

Picture + sound: The technical implementation of Blu-Ray is at a very high level. The sharpness is great and allows even small details and textures to come to the fore. The colour scheme looks very warm and natural and the balance of black levels and contrasts also support the positive overall impression of the image quality. The same can be said for the sound. Although there is no big fireworks of effects due to the genre, the surround channels are still repeatedly stressed by atmospheric ambient noises and smaller sound effects, which results in an overall very harmonious sound carpet. Very good!

Extras: Even if the German viewers don't enjoy the almost 3 minutes longer Extendet Cut, which was released in the USA or England, the full bonus offer fully compensates for this little shortcoming. It starts in the section "Documentations" with a two-part Making of (approx. 50 min.), in which the participants go into detail about the origin of the comedy. Supported by film excerpts and footage from the shooting, Apatow tells, among other things, why he decided to make Debbie and Pete the protagonists of his film, where the idea for the story came from or how the work with his own children came about. A very nice Making of, idem the usual Promo-Lobhudeleien within pleasant limits keep themselves.

Further it goes with a short documentary about the work with Albert Brooks (approx. 11 min.), as well as a very interesting documentary about the Reunion of Graham Parker & The Rumour (approx. 17 min.), which plays an important role in the film. In the section "Music" the band is allowed to show in five performances (about 20 min.) that they still harmonize very well together.

Although the film itself is a bit too long, a lot of material has landed on the floor of the editing room. Among them are also the 14 unreleased scenes (approx. 36 min.), which can be seen on the Blu-Ray. But also some extended and alternative scenes (approx. 18 min.), two gag reels (approx. 8 min.), as well as outtakes and alternative takes cut together in quick succession in "Line-O-Rama" (approx. 8 min.) and "Brooks-O-Rama" (approx. 3 min.) were saved from the editing room and pressed onto the Blu-Ray. Although it is often recognizable why certain scenes or alternative takes didn't make it into the movie, there are lots of amusing and worth seeing moments underneath all this material.

star Robert Smigel gets his own featurette with "Cycling with Barry" (about 3 minutes). Smigel is not only an actor, but also a comedian and author. Years ago Smigel created the character "Triumph the Insult Comic Dog" as part of his work for Conan O'Brien's "Late Night Show". This very popular figure is a dog hand puppet, which is in the best tradition of comedians like Don Rickles with nasty public insults for laughter. And if Simgel ever has stars like Paul Rudd, John Lithgow or Megan Fox nearby, then of course he won't let it take him to set Triumph on them. The extremely disrespectful but nevertheless very funny result can also be admired on the disc (approx. 9 min.).

As with every movie in which its children play, there is again the feature "Kids run free" (approx. 12 min.). The third edition of this bonus feature also shows how Apatow worked with his children on set. Finally, there is an amusing commercial with Jason Segel (approx. 1:27 min.), as well as an optional subtitled audio commentary by Judd Apatow on the film. It's a shame that he didn't bring any of the actors into the studio, but since Apatow is a very passionate narrator, who has a lot of interesting and amusing things to tell about the shooting, it's very easy to get over that.

A bonus package as interesting as it is amusing, that leaves nothing to be desired. Very good!

Fazit: "Immer Ärger mit 40" is charming and funny - at least if you like the special humor of Judd Apatow. The comedy has some very well observed and true-to-life moments to offer, but overall it is just too long to please all around. The Blu-Ray, on the other hand, leaves nothing to be desired, as it is technically very well realized and offers more than three hours of bonus material. But there is a deserved one for it then despite smaller lengths and humoristic Rohrkrepierern: absolutely recommendable!