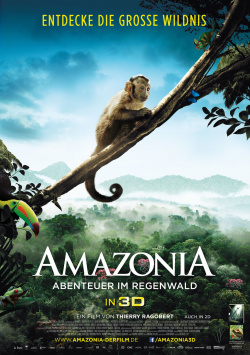 The little capuchin monkey Saï grew up in captivity and is only used to living with humans. When he lands in the wilderness of the Amazon jungle after a plane crash, the environment, which is completely unfamiliar to him, initially frightens him. But Saï can't hide for long in his protective cage in the plane wreckage. He has to venture into the jungle to find food and maybe even a way home. On his adventurous journey, the little monkey meets numerous other animals such as crocodiles, anacondas, anteaters or howler monkeys. And slowly he is getting used to life in the great outdoors. When he meets a group of conspecifics, he seems to be finally safe. But the leader is not at all sympathetic to the newcomer. And so Saï must continue to fear for his life every moment of the day - and he is growing more and more beyond himself…

Director Thierry Ragobert lets the boundaries between feature film and documentary blur in "Amazonia 3D". On the basis of a framework story staged with ten trained capuchin monkeys, the audience is to be drawn into the fascinating and magical world of the Brazilian rainforest. The first 3D film was shot in the Amazon region. After two years of research and script development as well as six more months for camera tests and technical development, the film was shot in the rainforest for 18 months. Nature, weather and the wild animals made a spontaneous adaptation of the shooting schedule and the course of action necessary again and again. At the end there might still be the feeling that the movie didn't really need the plot in order to be able to entertain and fully unfold its visual power.  But all in all Ragobert and his team have created a really wonderful and entertaining work, that makes the audience marvel, laugh and cheer with the little Saï.

However, the ambiguity about which sequences were staged with the help of the animal trainer and which are actually documentary snapshots takes away some of the persuasive power of some scenes. But before this can have a really negative effect on the positive overall impression, the next fascinating flood of pictures follows, from which the viewer is all too happy to get intoxicated. The fact that the film not only appeals to little animal and nature lovers, but also offers adults the best entertainment and quite a high information content, has a particularly positive effect.

Naturally, "Amazonia 3D" also contains a very clear ecological message. But this is not implemented too obtrusively, but makes it very clear how human intervention in an ecosystem like the rainforest affects the habitat of many thousands of animal species and what responsibility each individual bears in order to preserve this very vulnerable world. This message is conveyed with wonderful pictures, a nice story and a little humour in such an entertaining and endearing way that "Amazonia 3D" is not only warmly recommended to lovers of nature documentaries. Absolutely worth seeing!