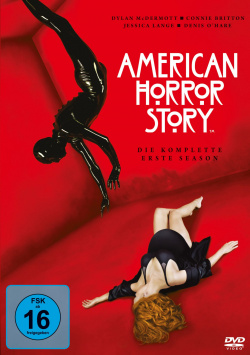 Content: Ryan Murphy is always good for a surprise. After his bitterly angry look at the world of cosmetic surgery in "Nip/Tuck", he created the musical series "Glee", a much lighter material that was primarily aimed at a young target group. The fact that the "Eat Pray Love" director can also do something different, however, he has already proven with his next series creation. The first season of "American Horror Story" is essentially a classic ghost-house story, but Murphy's mixture of horror, psycho-thriller, drama, black humor and all sorts of bizarre ideas has turned it into something very special, which is currently truly unique on TV in this form.

The concept of the series is particularly successful in telling a complete story with different protagonists in each season. Some of the actors will appear again in the following seasons, but then in completely different roles. This prevents the stories from being drawn out too cramped or the fans from being fobbed off without a reasonable resolution in case of an unexpected dismissal. The focus of the first season is on the Harmons, who try to save their family from falling apart in a new home. Since Vivien (Connie Britton) caught her husband, the psychiatrist Ben (Dylan McDermott) having sex with his patient Hayden (Kate Mara), her trust in her marriage has been destroyed. But for their daughter Violet (Taissa Farmiga) Vivien is ready to fight for a common future in a new place. But she soon has to question whether the house with its bloody past is suitable for this. Because not only the strange neighbour Constance Langdon (Jessica Lange) awakens extremely unpleasant feelings in Vivien. When she becomes pregnant again only a short time after moving in, strange and frightening events accumulate. Soon the Harmons realize that they are trapped in the middle of an "American Horror Story" and that now their marriage is the least that is at stake...

A killer dressed entirely in black rubber, an elderly housemaid (Frances Conroy) who appears to father Ben as a lasciviously seductive young woman (Alexandra Breckenridge), a mysterious stranger with a burnt face (Denis O´Hare), the neighbor's son (Evan Peters) with psychopathic tendencies, mysterious apparitions, eerie noises and the house's increasingly revealing story with each episode - all these are some of the most successful elements that make up the story of the first season of "The House".American Horror Story" is knitted. In the first episodes the series still seems to be a bit too strained for bizarreness. But once it's found its tone and tempo, it's hard not to be feverish with this intense creepy tale.

Excellent camera work, atmospheric features, the great performance of the sound designers and a slightly disturbing opening credits support the very special mood that emanates from this series. The successful mixture of bitterly evil humor, family drama, classic horror and some scenes, which are refreshingly drastically knitted against the usual conventions of the current TV landscape, lend the events in the haunted house a very intense charm. In the twelve episodes in which the completed story is told, the tension screw is slowly but effectively tightened. The peak seems to have already been reached in episode 11. But even if the final episode is a bit more leisurely, it doesn't mean that it doesn't have the one or the other good shock effect to offer and is enormously important for the overall effect of the first season.

Despite the rather small number of episodes and the fact that the season doesn't end with a cliffhanger and works towards the finale from the first scene on, there are some small lengths here and there and there and seemingly unnecessary side plot strands. But when the credits of the last episode are running, there is a very positive overall impression and a coherent picture that makes us want to hear the next story that the makers of this well done horror series will tell us. Absolutely worth seeing!

Picture + sound: The series shines with its atmospheric features and outstanding camera work. Both are shown off very well on the DVD. This is due to the good picture sharpness, the very good colouring and the successful adjustment of contrasts and black values. The Dolby Digital 5.1 Mix is also convincing. The more directionally mixed dialogues are contrasted by some successful sound effects, which ensure a successful use of the surround channels and thus a very atmospheric sound carpet. Good!

Extras: The box for the first season has some good extras to offer. The first DVD begins with an audio commentary by series creator Ryan Murphy on the pilot episode. An interesting and for fans of the series really worth hearing commentary. But for those who prefer video extras, the fourth disc is great. The heart of the series is the almost 24-minute Making of, which interviews the makers and actors about the creation of the first season and the unusual concept of the series. There is also a tour through the Mörderhaus (approx. 6 min.), the implementation of which took some getting used to. A good featurette for the creation of the title sequence (approx. 9 min.) and interviews with the actors who play the house spirits (approx. 14 min.) round off the bonus offer of the DVD box. Gut!

Fazit: "American Horror Story" is a very original series, which mixes horror, drama, bad humor, eroticism and all sorts of bizarre things to an atmospheric whole. The concept that the series in each season tells a self-contained story with different characters and locations proves to be an extremely successful move in the first year. Thus the story is not artificially drawn out and can slowly but surely tighten the tension screw until the finale. Captivatingly filmed and well played this first season proves to be a real enrichment for the horror genre. The box is technically well done and equipped with some extras, so it can be warmly recommended to all those who like it weird, scary and bloody. Recommended