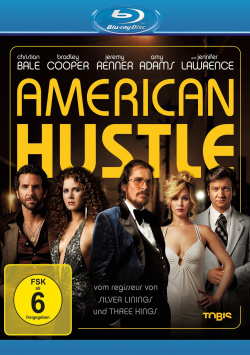 Film: Irving Rosenfeld (Christian Bale) is convinced to lead the perfect double life. On the one hand, he maintains a bourgeois façade as the owner of several laundrettes and a faithful family man. On the other hand, together with his lover Sydney (Amy Adams), he accumulates a considerable fortune through clever fraud. Irving believes that his scam is foolproof and has no idea that the overambitious FBI agent Richie DiMaso (Bradley Cooper) has long been on his trail. When DiMaso succeeds in setting a trap for the couple of tricksters, Irving and Sydney have to get involved in a deal in order not to end up in prison. They are to use their criminal talent to prove corruption and connections to the mafia to the mayor of Camden, Carmine Polito (Jeremy Renner). Because DiMaso is sure that the popular politician behind his clean man image does not wear a white vest. But the events soon threaten to get out of hand when Irving's horned wife Rosalyn (Jennifer Lawrence) interferes with the operation...

For his latest film "American Hustle" director David O. Russell has gathered a proven team around him. In addition to Bradley Cooper and Jennifer Lawrence, the dream couple from his last cinema success "Silver Linings", Amy Adams and Christian Bale from "The Fighter" will also be there again. Bale in particular is once again proving to be a first-class method actor. Had he drastically lost weight for the role of the drug-addicted Dickey in "The Fighter", he has fed himself a proper place for "American Hustle", which is only surpassed by his terrible hairstyle (if you can call it that) as an insult to the eye. This Christian Bale has nothing in common with the muscle-bound Batman anymore - and that's a good thing. Because in combination with his extremely good-humored play the actor can disappear so completely behind this figure and one thinks as a spectator also not once of the fact that here the hero from "The Dark Knight" grinds his unsightly beer cemetery with pleasure.

However Bale is only one of the many cogs, which move with each other in perfect harmony with "American Hustle". The other actors also all deliver wonderfully light-footed performances. Bradley Cooper and Jeremy Renner also with nasty hair, Robert De Niro completely without, Amy Adams as a sly sex bomb, Jennifer Lawrence as a somewhat rough, but quite shrewd housewife, as well as in a small, but fine supporting role comedian Louis C.K.. ("Blue Jasmine") - they all turn this crook comedy into a great acting movie of a particularly amusing kind.

Besides the actors, the perfect 70's set, the matching clothes, the soundtrack that is perfectly tuned to the respective scenes as well as the very engaging camera work are among the aspects that make this film so successful. But the movie's greatest strength is probably its Oscar-nominated screenplay, which is full of wonderful witty words and amusing twists. It is the outstanding interplay of script, acting and direction that prevents the story from becoming a silly farce and the characters from becoming witty figures.

"American Hustle" may not be the most dramatic of all 2014 Oscar candidates. It is certainly first and foremost an entertaining entertainment film and not a spiritualized Arthaus cinema. The reason why the comedy has been so successful and nominated for numerous film awards is that David O. Russell has once again proven that you can provide perfectly composed entertainment without offending your intellect. It shows that great actors and a good script are much more important than special effects and 3D optics, and that actors don't always have to look like they're licked to make you want to watch them. And that's why "American Hustle" isn't really important, but it's a very good movie that offers over two hours of perfect entertainment. What more could you want! Absolutely worth seeing!

Picture + sound: 70s feeling is not only due to the hairstyles, clothes or equipment, but also by the very good visual implementation of the film for home cinema. The warm colours, the high image sharpness and the harmonious contrasts leave a very positive impression. And the lively DTS-HD Master Audio Mix also impresses with its powerfully mixed soundtrack, atmospheric ambient sounds and dialogues that are easily understood. Good!

We continue with eleven edited or extended scenes (approx. 22:20 min.), among which there are actually some very worth seeing moments. The good US making of (approx. 16:36 min.), a clip for the Oscar application (approx. 1:38 min.), uncommented B-Roll recordings (approx. 7:57 min.), as well as the English trailer complete the additional offer. Gut!

Fazit: "American Hustle" may not be a very deep Arthaus food, but it is a wonderful entertainment film with an extremely good-humoured cast and a humorous crook story. It remains to be seen whether the film had earned 10 Oscar nominations. But the comedy should definitely get a prize for the meanest hairstyles. The Blu-ray is technically well implemented and also some of the extras are really an enrichment. But there is a very clear one: Absolutely recommendable!