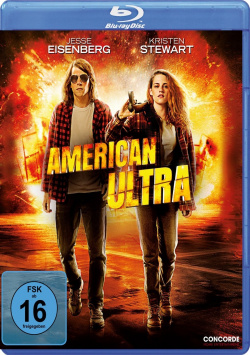 Film: Mike (Jesse Eisenberg) only knows two real passions in his boring life: his girlfriend Phoebe (Kristen Stewart) and smoking weed. He spends the day either on the couch or behind the counter of the local supermarket. But then something completely unexpected happens: when a woman (Connie Britton) who seems to be strange to him says strange things, the something in Mike activates. A short time later the supermarket is attacked and Mike can defend himself with incredible skills against the crooks. As it turns out, Mike is a CIA-trained sleeper agent who is now to be wiped out. Reactivated by his former superior Victoria Lasseter, he now has to face the most nasty killers of the CIA. And so he soon leaves a bloody trail behind in the small town, which will reveal a number of dangerous secrets…

The idea presented by director Nima Nourizadeh ("Project X") in his latest film "American Ultra" literally screams for "cult film": A notorious pothead is actually a dangerous secret weapon of the CIA. The young man, who can't leave his little home kff because of anxiety and who draws comics about the adventures of a space monkey, becomes an unstoppable fighting machine, who eliminates one hit man after another in a quite drastic way. At his side is the rather quiet girlfriend, who has endured his quirks with the patience of an angel (and one or the other joint) and who suddenly mutates into a battle Amazon. Her opponents include an arrogant CIA upstart and saliva eater (wonderful: Topher Grace) and an insane killer (wonderfully over-twisted: Walton Goggins). These are all extremely successful and amusing ingredients, which actually have a certain cult potential.

Leider these ingredients are mixed together to a not quite so spicy complete work. The movie is extremely entertaining, but overall falls short of its possibilities. That's because some of the scenes are too overdone, while others just lack the necessary bite. That's a shame because this action-smoking comedy, if it works, is really fun. This is not only due to the absurd story, but also to the good-humoured actors. Jesse Eisenberg is a great fighting machine and Kristen Stewart, who once again works with very reduced facial expressions, fits perfectly into her role. Especially when the humor is served a bit darker, both of them and their co-stars really get into their game and make sure that the entertainment value is increased a lot.

With a bit more pacing at the beginning of the movie, some more sparkling gags and a more biting tone throughout, "American Ultra" could actually have become a real cult movie. It's a shame it wasn't enough. Nevertheless, there are enough positive aspects that make this somewhat different Bourne variant an enjoyable cinema experience. And so at the end it is still enough for one despite a few small pendants: Absolutely worth seeing!

image + sound: The image of the Blu-Ray is absolutely clean and has a very good overall sharpness, which also highlights smaller details in dark scenes. The colour scheme is atmospheric, as it underlines the gaudy look of the film very well. The DTS-HD 5.1 Mix provides a lot of movement on the surround channels, especially for explosions and other action-heavy scenes, but at the same time transports the dialogues out of the speakers in a way that is easy to understand. Good!

Extras: The heart of the good bonus material is a good Making of (approx. 38:42 min.), which deals with various aspects of the production in an informative and entertaining way. In addition there is an amusing listing of the costs for Mike's "murder weapons" (approx. 3:15 min.), a few outtakes (approx. 2:35 min.), as well as an audio commentary worth hearing by Nima Nourizadeh, for which there are unfortunately no subtitle options.

Fazit: "American Ultra" is a wonderfully crazy Bourne variant with high cult potential, which unfortunately is not fully exploited. However, even though some scenes lack the last whistle, the final result is still extremely entertaining. The Blu-ray presents the film in very harmonious picture and sound quality and also has good extras on board. But there is a clear one: Absolutely recommendable!