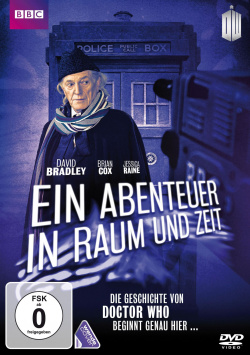 An Adventure in Space and Time - DVD

Film: Great Britain 1963: Sydney Newman (Brian Cox) is supposed to use his experiences, which he made with private television, to bring a breath of fresh air into the BBC drama department. And Newman already has an idea how he's gonna do that. There should be a new science fiction series without the usual robots and glupe-eyed monsters, which not only entertains children well, but also teaches them something. His former assistant Verity Lambert (Jessica Raine) will lead the production of the men-led BBC and successfully bring the stories of a time-travelling doctor and his companions to life. But Verity and the young, Indian-born director Waris Hussein (Sacha Dhawan) repeatedly meet with resistance from the conservative, dusty station management. They are deported to a small studio, the props are not ready in time and the budget could be bigger. After all, William Hartnell (David Bradley) seems to be a very good actor for the nameless doctor. After several problems Verity and Waris manage to get the first episode into the box. But shortly before the first broadcast there is a tragic assassination attempt on the American president in Dallas and the interest of the television viewers now belongs entirely to the news and not to any new science fiction series. And so the end of "Doctor Who" seems to be already decided after episode 1. But Verity still has an ace up her sleeve...

On the occasion of the 50th anniversary of "Doctor Who" there was not only a very special anniversary episode, which was even shown in 3D in some cinemas, as well as several documentaries. The BBC also had a feature film staged, in which the origin of the series and the hour of birth of the incredible success story are recounted. The result is called "An Adventure in Space and Time", a charming, very lovingly executed drama that can not only enchant "Doctor Who" fans. Of course, there are numerous moments here where only connoisseurs of the material will develop goose bumps. The first appearance of the Daleks is just as much a part of it as a surprising guest appearance at the end of the film.

However director Mark Gatiss, who has already been seen in two episodes of the cult series himself and has been heard in two others, has managed the feat of creating a tribute to "Doctor Who", which also works really well as a film completely detached from the series. Loveable characters, a harmonious mixture of drama and humour as well as the entertainingly constructed dramaturgy make "An Adventure in Space and Time" an extremely entertaining and heartwarming TV film. The light-footed staging also benefits from the well-chosen cast. David Bradley, known as the quirky Hogwarts janitor Argus Filch in the "Harry Potter" movies, is the first Doctor to be perfectly cast, which becomes especially clear when you look at the original excerpts with the real William Hartnell in the bonus material. But also Brian Cox, Sacha Dhawan and last but not least Jessica Raine ("Call the Midwife") as a tough producer, who has to assert herself in a pure male domain, deliver wonderful performances.

Although the film can only reveal its full power to "Doctor Who" fans, viewers who are generally interested in television history or simply love light British entertainment should not miss this beautiful work. Absolutely worth seeing!

Picture + sound: The picture of the DVD convinces with a high detail sharpness, a very atmospheric colouring and a good contrast adjustment. Especially for a TV production this is more than satisfactory. The tone is, as in a rather calm drama, not unusual, rather reserved. But it's just some of the beloved "Doctor Who"-sound effects that make for some good surround moments and a pleasantly lively sound backdrop. Good!

Extras: As bonus material there is a short, very interesting feature about the real William Hartnell (ca. 5 min.), as well as a nice, but with a little more than 10 minutes also a little short making of. In addition, there are original excerpts from the first and fourth episodes of "Doctor Who", three short "reconstruction" clips, the 1963 title credits compared to the 2013 movie, and a few edited scenes. Altogether these are 25 short, but very worth seeing minutes of additional material, which will be very much appreciated by loyal "Doctor Who" fans.

Fazit: "An Adventure in Space and Time" is a very lovingly staged, amusing and wonderfully nostalgic look at the genesis of the cult series "Doctor Who". At the same time, the BBC film staged to celebrate the series' 50th anniversary is also a very nice story about the power of creativity and that it is worth holding on to one's dreams. On the DVD the well cast film presents itself in decent picture and sound quality, the bonus material doesn't necessarily convince in quantity, but in quality. Not only for all "Doctor Who" fans, but generally for lovers of humorous British dramas absolutely recommendable!