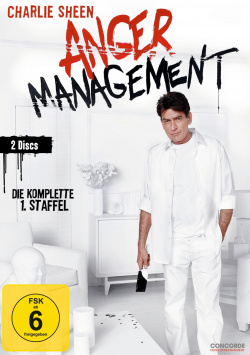 Content: After his career as a baseball pro had come to an abrupt end due to an extreme dislocation and a broken leg, Charlie Goodson (Charlie Sheen) got his life back under control. As a psychotherapist, he of all people now tries to teach other people how to control their anger better. While he succeeds quite well with his patients, he himself is always on the verge of losing his composure. No wonder, since the relationship with his own therapist and best friend Kate (Selma Blair), quarrels with his ex-wife Jennifer (Shawnee Smith) about the upbringing of their daughter Sam (Daniela Bobadilla), his not exactly effortless therapy group and occasional love affairs, in which Charlie doesn't necessarily prove to have a good hand, make sure that Charlie is always on the verge of madness. And when his father (Martin Sheen) shows up, the chaos in Charlie's life is perfect...

Fury Charlie Sheen looks into the camera and curses: "You think you can just fire me? You think you can just replace me with another guy?" You could almost get the impression you're looking at one of Sheen's almost legendary outbursts that haunted the net on his scandalous ending to the hit series "Two and a half men" and even gave the actor a short-lived tour on which he was allowed to express his anger in front of a live audience. But far from it. This is the first scene from Sheen's latest sitcom "Anger Management", in which he takes a hard look at himself and his private life with a lot of self-irony.

Those are the moments in which the series is really fun. For example, when Sheens Ex Denise Richards appears as a guest star in an episode and the two make fun of their media-laden Rose War, or when Sheens father Martin gives himself the credit and the Filius gives a side blow to his role as US President in the great series "The West Wing". But such self-ironic moments, in which reality and fiction are interwoven, are only a gimmick that wears off relatively quickly. Apart from that, "Anger Management" is only a very conventional sitcom, which doesn't really differ fundamentally from series like "Two and a half men" - especially since the humor here and there is primarily concerned with the topic of sex.

Although this doesn't sound very positive at first glance, the series offers rock solid and sometimes very funny comedy entertainment. The members of Charlie's self-help group are absolute sitcom clichés, as you know them all too well from similar series like "Mein lieber John" or "Go on". But after a few episodes the characters actually grow a little attached to your heart and it's really fun to watch them do their sessions. And Charlie's therapy lessons, which usually take place in Kate's bed - or at least end there - also offer some nice laughs. If you don't really expect something new and are just looking for nice entertainment with a good-humoured Charlie Sheen and amusing side characters, you really can't go wrong with the first two seasons of "Anger Management". Recommended!

Picture + sound: For a current TV sitcom, the technical implementation of the series on DVD is more than satisfactory. The image is absolutely clean, the colors are powerfully mixed and the sharpness is at a very good level in most moments. The sound, which is available both in Dolby Digital 5.1 and in an only marginally more powerful DTS mix, transports the dialogues out of the speakers in a way that is easy to understand. However, there is not much movement in the surround range, which is not surprising for a sitcom. Good!

Extras: Since only the first DVD of season 1 was available for testing, the bonus material of both seasons could not be viewed. Season 1 has a look behind the scenes, some outtakes and an interview to offer. In season 2, only a few outtakes are on the bonus program.

Fazit: "Anger Management" works particularly well when Charlie Sheen targets his own image and his headline-ridden private life. Otherwise the whole thing is a very conventional sitcom, which has to offer some very good laughs in spite of many well-known ingredients. And even if the cult potential isn't as high as with "Two and a half men", Charlie Sheen fans should also get their money's worth with his new show. Recommended]