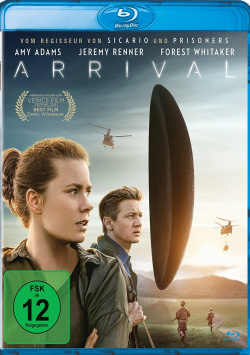 Film: The incredible has become reality: A total of twelve spaceships have landed at various locations around the globe. Nobody knows with which intentions the extraterrestrial visitors came to earth. People are worried and heads of government are getting nervous. To prevent a military confrontation, the renowned linguist Louise Banks (Amy Adams) and the mathematician Ian Donnelly (Jeremy Renner) are commissioned to establish contact with the aliens and decipher what they want on our planet. But the search for answers is extremely difficult, because the two of them need above all something of which they have less and less: Time!

With "Arrival", director Denis Villeneuve ("Prisoners", "Sicario") provides further proof of his artistic versatility and craftsmanship. At the same time, this superbly staged alien invasion is a perfect testimony that Villeneuve is absolutely the right choice for the "Blade Runner" sequel that he will bring to cinemas in 2017. Because Villeneuve proves that one can also tell intelligent sci-fi stories that are not overburdened by an unnecessary CGI overkill or in which an alien invasion is crushed with woodhammer patriotism. Sure, such movies can be a lot of fun. But it's just nice when a director isn't afraid to use a genre like this to tell a deep, highly emotional story.

Of course you shouldn't reveal too much here, because the film takes a completely different direction than you might think and deals with a question that goes far beyond the usual "How would you behave in an alien invasion" topic. Although the last act is the most interesting part of the film for a discussion, I prefer to turn to other aspects of the staging so as not to interfere with the emotional impact of the last twenty minutes. But fortunately much more can be said about "Arrival". For example, there is the almost perfect interplay of images and music, which at the very beginning, but also in many other moments, intensifies the effect of what is currently being told. The game of the actors, especially Amy Adams, is very good and also the elaborate, yet somehow restrained CGI-effects are beyond any doubt.

What some viewers might be bothered about is that - apart from a short scene - there is no action at all. Here the dialogues and the moral questions are absolutely in the foreground. "Arrival" is not a simple popcorn cinema, but a film that requires its viewers to think and reflect. You have to be able to get involved with that as well as with the very emotional core of the story, which might seem a bit too thick for some people. But those who succeed in letting themselves be carried by the withdrawn narrative tempo and the feelings that the film stirs up, will realize that "Arrival" is nothing less than a masterpiece of modern science fiction cinema. One of the big cinema highlights of 2016 and therefore also in home cinema: Absolutely worth seeing!!

Picture + sound: The film lives from its fascinating visual language and the great sound design. Fortunately, both are also shown to advantage in home cinema. The picture is absolutely clean, has an atmospheric colouring and a high image sharpness. The DTS-HD Master Audio Mix not only brings out the dialogues and the atmospheric music, but also the many small but enormously important sound effects perfectly. Very good.

Extras: The Blu-ray has about 80 minutes of bonus material to offer. We start with a good Making of (ca. 29:53 min.), which should definitely be seen after the movie, as the story is intensively dealt with here. Besides there are also very interesting features about the film music (about 11:22 min.), the editing (about 11:17 min.), the great sound design (about 13:57 min.), as well as about "The principle of time, memory and language" (about 15:22 min.). A few good and really worth seeing extras.

Fazit: "Arrival" is one of the best films of the past cinema year and one of the best science fiction films of recent times. A great film that presents itself on Blu-ray in very good picture and sound quality. A few extras worth seeing are also given to the spectators. But there is a very clear one: Absolutely recommendable!