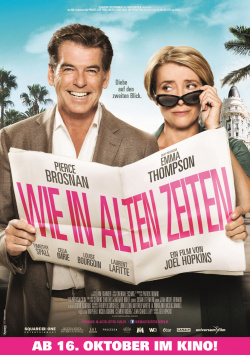 As in old times

The days when Richard (Pierce Brosnan) and Kate (Emma Thompson) were a happily married couple are long gone. Meanwhile the two are spinning enemies and don't miss any opportunity to get on each other's nerves. But then Richard learns that he was cheated on selling his company and that not only the pensions of his employees, but also his and Kates' are lost. The fact that he and his employees have worked hard all these years and should now be left empty-handed is something Richard will never accept. And so he and Kate bury their hatchet to confront the deceiver (Laurent Lafitte) in France. But when he is completely unimpressed, other guns have to be fired. With the help of their best friends Jerry (Timothy Spall) and Pen (Celia Imrie) Richard and Kate want to get back the money that was stolen from them. But can this really go well?

"Wie in alten Zeiten" actually has all the ingredients for a successful comedy: charming main actors, between whom the chemistry is right, an amusing premise, which is somewhere between a comedy about marriage and a pensioner version of "Ocean`s Eleven" and picturesque scenes, which bring a bit of holiday feeling into the gloomy autumn. With Jerry's mysterious past, a very amusing running gag has been added to the story, which always makes for really good laughs. And when Pierce Brosnan takes his James Bond image for a ride, the funny fun seems to be perfect.

Despite all these good ingredients, the overall picture just doesn't really convince. No question about it, Joel Hopkins ("Love at second sight") has staged a nice comedy, which can radiate a lot of charm in its best moments. But too often the timing just isn't right and the already weak gags lose their last spark of esprit. Without a harmonious timing and working humor, the game of the really good actors seems rather cramped and exaggeratedly shrill, which additionally clouds the pleasure for the viewer.

However, this has a negative impact especially in the first third. After that, the staging seems to have found the right pace and the good moments clearly dominate over the rather silly jokes. Nevertheless, this comedy never offers more than nice, harmless entertainment. That's a little bit unfortunate, because the really nice basic idea could have been more out of it. And also for the good-humoured ensemble it would have been nice if they could have done something more with their talent. But Hopkins plays it safe with his staging, never deviates from the well-trodden paths and remains much too brave when the story would have required more bite and malice.

Thereby he may achieve that his film doesn't really hurt anyone and especially entertains the somewhat older target group very well. But unfortunately, this also leads to the fact that "Like in old times" can't leave any lasting impression on the viewer. If you are looking for harmless amusing material for a relaxed cinema afternoon, you can't go wrong with this comedy. But if you hope for a lot of fun because of the actors and the funny premise, which doesn't only make you smile, you will probably leave the cinema disappointed. And the bottom line is that that's only enough for one: Worth seeing with some concessions!